Eleven Pufferfish were found floating off Broadstairs, plus one washed up at Sandwich Bay, yesterday (May 25).

The pufferfish, also known as blowfish, are not native to British waters and most are found in tropical and subtropical ocean waters.

The fish appear could be lost ‘preserved’ stock if they were fitted with ‘toy eyes’ such as the one below. This means they are caught and dried out in an inflated form for commercial sale. The eyes are stuck on  to make them look better for sale. 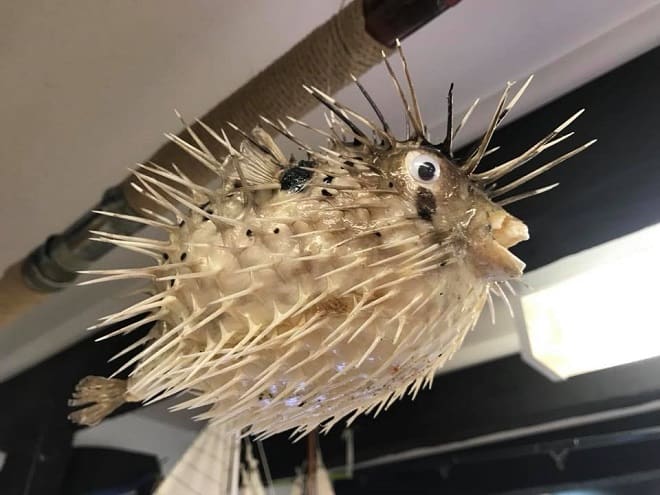 Thanet Coast Project officer Tony Child said: “ The fish are of tropical/sub-tropical origin. Someone appears to have lost some of their stock or someone has lost their cargo overboard somewhere!”

The flotsam surrounding the fish is a natural common bloom-forming algae which rapidly breaks down and disappears.

Blowfish inflate themselves to protect against predators. Instead of escaping the fish use their elastic stomachs to quickly ingest huge amounts of water or air to turn themselves into an inedible ball several times their normal size.

Almost all pufferfish contain tetrodotoxin, a substance that makes them foul tasting and often lethal to fish. To humans, tetrodotoxin is deadly, up to 1,200 times more poisonous than cyanide.

Despite this the fish is a Japanese delicacy but can only be prepared by licensed chefs who use an exacting cut.