Eighteen months of planning by Minster Twinning Association has culminated into a milestone landmark in its history when they hosted the 20th anniversary of the official twinning with Armbouts-Cappel, France, in the form of a 20th Anniversary May Ball, with the theme of ‘Everything English’ . This event was co-ordinated by John Quittenden, who spent many hours researching the finer details. 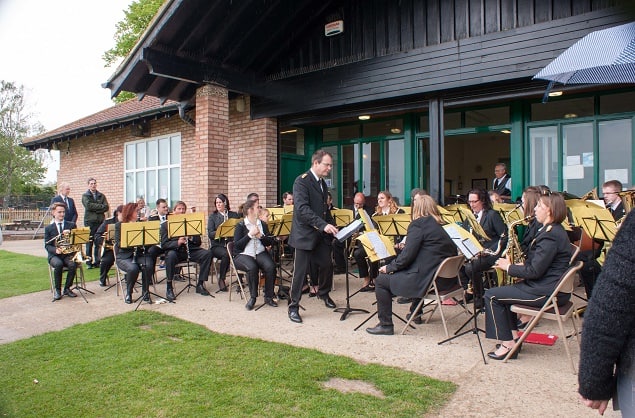 Prior to the official signing of the constitution back in 1998, the two villages had already been linked with school exchanges, football tournaments and various other fun aspects like ‘It’s a knockout’.  This was known as the ‘Friendly Link’, so the bonding goes back over 40 years.

The activities of this special event commenced at midday on Saturday 12 May  with a ‘Meet and Greet’ held in the Pavilion in the recreation ground of Minster with 63 French visitors.  Claude Cornelius, the Mayor of Armbouts-Cappel who signed the constitution in 1998, was a welcome and honoured guest. Serious reminiscing ensued with some of the other former founder members, eg  Phil Sackett, Ken and Lindsay Thacker, Christine Lynch and Colin Holden.  The photographic exhibition in the pavilion was a hot spot for new and older members. 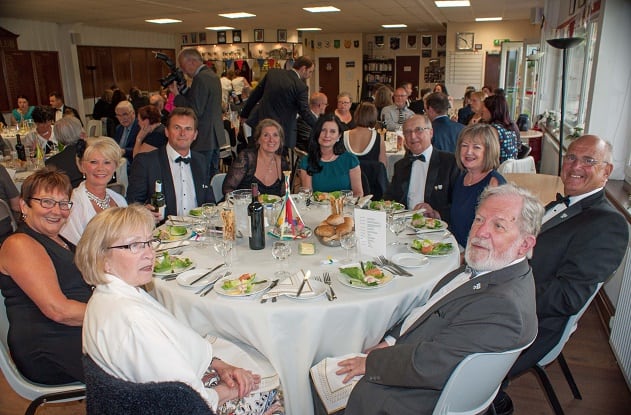 Official speeches were made by Malcolm Bubb, current Chair of the Minster Twinning Association, Jean Luc Darcourt, the mayor of Armbouts-Cappel and Cllr Penny Gimes, Chair of Minster Parish Council, with Monsieur Cornelius talking of his excitement of the day being celebrated.  Phil Sackett responded to this with equalled enthusiasm of the reunion.  Bouquets were presented to the Mayor, Cllr Gimes and the two translators by the May Queen, Misty and her attendant, Layla.  Cllr  Gimes then crowned the May Queen after reading out several verses of a poem by Tennyson. 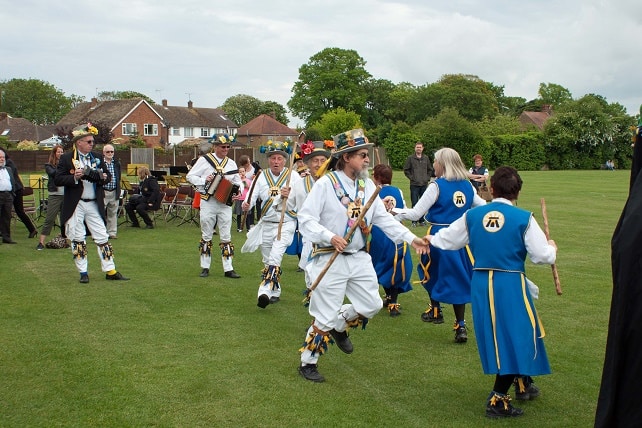 Schoolchildren delighted the audiences with a display of Maypole dances.  Their commitment and determination to make this a success showed through, even though they had had only a few hours to learn this ‘strange dance’. The occasional guidance was needed to get them in the right position! The Morris Dancers showed their skilful routines and encouraged several French to join in.

Slight drizzle at this point, sent the French Band under cover but they continued to entertain undeterred. 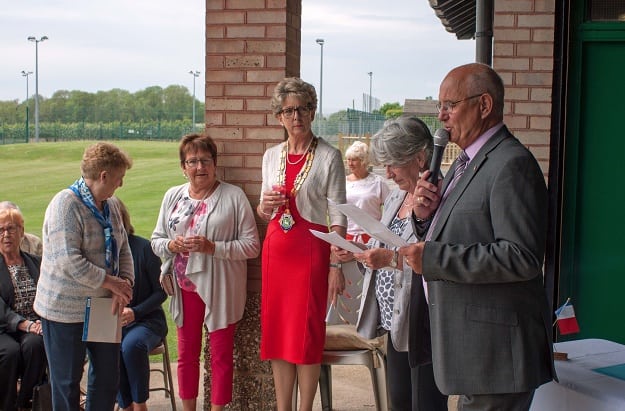 The main part of the anniversary, the May Ball, was held in the Bowls Club, firstly to enjoy a traditional English feast, English wines and English cheeses, whilst being entertained by a table magician, whose sleight of hand amazed everyone. Each table was heard to say: ‘How did he do that?’ Great too that he was actually French, so communication was understood.

The five-piece band played a selection of all types of music and had the dance floor full from the word go.  Even the bar staff were jigging away. During the break, the Mayor presented the Chairman with a delightful marquetry picture, made by one of the French villagers.  Jean Bonduelle presented a scaled down model of St Mildred, the Twinning Giant. (Jean had made the giant for the Association in years past.)

Every good thing had to come to an end and the French visitors reluctantly said their goodbyes and set off for the long journey home, exhausted but thrilled with the celebrations.

There are too many people involved in this successful event to name personally, but a big thank you goes out to everyone involved, either the organisation side or the participation in the event and a special thanks to KCC and MPC for their support too. 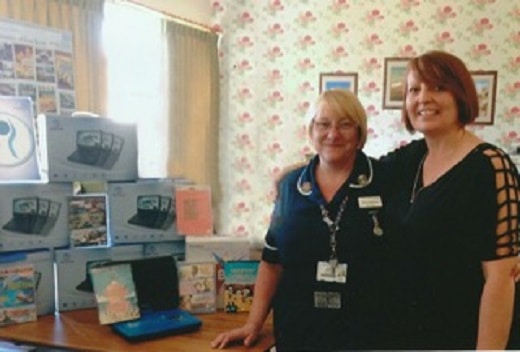 Knowing what to do after the death of a loved one, as an appropriate memorial is always difficult.  Following the death of their father Dave Campbell at the age of 78, who lived at Homefleet House Ramsgate and formerly of Biddenden Close Margate, it was clear as a family the Campbell’s wanted to give something back to the staff of St Augustine’s Ward in Margate who cared for their dad during the final weeks of his life.

Although he went into the hospital seriously ill and eventually received “end of life care” their dedication and support to their dad and his family were exceptional. They were particularly moved by the “compassion symbol” and its positive impact and holistic effect on the sad and grave situation they were all facing.

In order that a legacy could be left they decided to purchase some portable entertainment systems for the patients of St Augustine’s Ward, QEQM Hospital. Many of the patients are in for long periods and a few hours’ entertainment could be the highlight of their day.  They managed to raise enough to buy several DVD players, CD radio and some DVDs.

Vicky Craig, the youngest daughter of Dave, handed over the gifts with heartfelt thanks from the family and friends of her dad to the ward manager Wendy, who was throughout Dave’s stay the consummate professional, as of course were all the staff.  The wards staffing has so many levels and the family were so well looked after, from not only the clinical staff but also the unsung heroes including the cleaners and “tea trolley” staff.

As a very close family they cannot thank the hospital, St Augustine’s Ward and all the staff, enough for their professionalism, care and thoughts.

Thanks to them all, they hope this small gift will somehow help others who find themselves in similar situations in the future.

The Ramsgate Military and Heritage Trail is something we will hear a lot about in the next few months, but members of Ramsgate Rotary Club had an early foretaste of things when “Mr Ramsgate” Ralph Hoult spoke on the subject.

He told how a new educational and immersive walk to celebrate the town’s rich history is  being designed as a self-guided walk around the town, highlighting areas  easily missed and could be forgotten with time.

His talk was illustrated with photos of some of the areas to be included.

Before the meting started Mr Hoult was congratulated by President Graham Larcombe on receiving an OBE from the Queen, for services to the community of Ramsgate.

He was thanked for his talk by Past President Lawrence Page.

We have another two activities in our most successful 61st year for the association in bringing geography to all ages and backgrounds across the Isle of Thanet. Members and friends are invited once again to join both of our forthcoming activities. First we have our AGM on June 4 . This is a pleasant social occasion  when you will enjoy  refreshments including delicious homemade cakes.

During the evening Laura Shawyer, a local resident, will tell us about her ‘Mud Larking on the Thames Foreshore.’ The meeting will take place in the Joyce Smith Building behind Crampton Tower at The Broadway, Broadstairs. Doors open at 7pm ready for a 7.30pm start.

Visitors are also welcome to join us on June 25 for a visit to the UK’s National Scientific Collection of Lavenders and Lavender Breeding Centre. The lavenders will be in full bloom just before 60 species of them will be shown en-masse at the Hampton Court Flower Show.

This internationally renowned collection is unique in the world. We shall be the guests of Dr Simon Charlesworth who hopes to win his 15th gold medal at the show.

The coach  (£12.50 per head) will leave Pierremont bus stop, Broadstairs, at 9.30am  and pick up at Vera’s (near Tesco)s in Cliftonville, Margate’s Shell Grotto and Birchington Square . We will stop in the picture post card village of West Peckham for a picnic on the green or a pub lunch before proceeding to the Downderry Nursery for an afternoon at the National Lavender Collection

On Bank Holiday Monday, Thanet Writers launched Shoal, a collection of short stories by Thanet-linked writers and authors, to a packed crowd at the Margate Bookie literary festival. Tickets to the event sold out and every seat was taken.

The event was hosted by Isle of Thanet News columnist (and Kent Columnist of the Year 2018 Finalist) Seb Reilly, who was also one of the authors published in Shoal. After speaking about Thanet Writers and the background behind the publishing of the anthology, he introduced each of the five speakers who in turn read their work at the event.

First to read was winner of the Guyana Prize for Literature and a Commonwealth Short Story Prize Maggie Harris, who read an extract from her short story ‘The Year the Flamingos Came’ from Shoal, along with two poems.

Next, bestselling and celebrated author David Lee Stone, also known as David Grimstone, read from ‘The Lickspittle Leviathan’. He was followed by Thanet Writers Fiction Editor Alice Olivia Scarlett, who read her story ‘Black Frost’ – a dark take on a traditional fairy-tale – in its entirety.

Isle of Thanet News columnist Matthew Munson was next to take the stage, and he spoke about celebrating people coming together for books, and the positive impact of literary festivals, before reading his first ever published story, a piece of flash fiction. 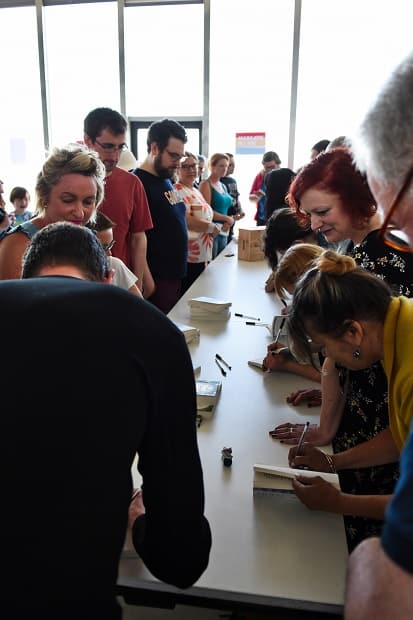 Seb Reilly said of the event: “It was an honour and a pleasure to introduce some of my favourite writers, share a stage with them, and be published alongside them in Shoal. The Margate Bookie was an incredible experience and we are extremely grateful to the organisers for the opportunity to launch Shoal at a venue as prestigious and iconic as the Turner Contemporary. I am proud to have been part of this amazing celebration of Thanet’s writing talent.”

The event was captured on video, and the highlights can be seen below:

After the launch, Thanet Writers CIC Director Matthew Munson said: “I’m delighted by the response to the launch of Shoal; seventy-five tickets were sold for the launch event, and there was such an amazing vibe from the audience at a weekend all about books! All of us at Thanet Writers are proud beyond words – ironically – about this first anthology of ours. Shoal reveals just a fraction of the diverse talent this island of ours possesses, and the desire for good books by so many people. We’re thrilled to be part of the creativity that helps make Thanet such a diverse place!”

Shoal is available to buy now from Waterstones and Amazon. For more information and links to other retailers please visit thnt.uk/shoal

Sainsbury’s charity of the year

Sainsbury’s Local Charity of the Year scheme is back for the tenth year and the Thanet Westwood Cross store is calling for local charities to nominate themselves to be its next local charity partner.

Nomination forms can be collected in store or email prl.Thanetwestwoodcross@sainsburys.co.uk

Nominations close on 29 May.

Three shortlisted charities go to customer vote between 11-24 June in store and online. 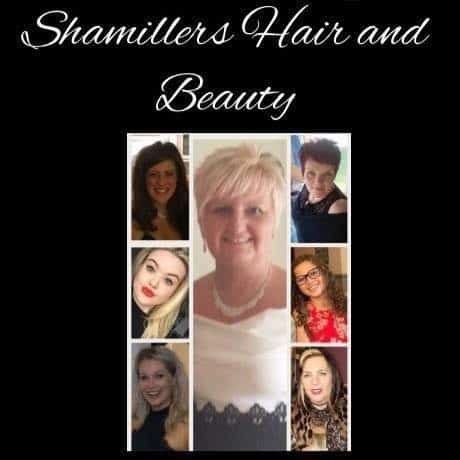 Shamillers, at 130 Hereson Road, Ramsgate, is holding a charity event on July 7 from 9am onwards.
They are raising money for Cancer Research UK and The Little Princess Trust.
There will be face painting, a raffle, pink mock-tails, hair donations, a cake sale and lots of information about how to prevent and recognise cancer.