A six-year-old girl from St Peter’s has raised £500 for the East Kent Headway charity – and she is not finished yet.

St Mildred’s infant pupil Aeryn Plewis is raising awareness and cash for the cause, which is a charity for people who have suffered brain injuries, as part of her role as the Face of Mid Kent.

Aeryn won the title in February after being entered for the Face of Europe and the World pageant by her dance teacher Charlotte Silver, of Silver Slipper in Westgate. Charlotte also won a title, scooping the Face of England crown.

The little one triumphed in her heats and was also honoured for raising the most charity funding. 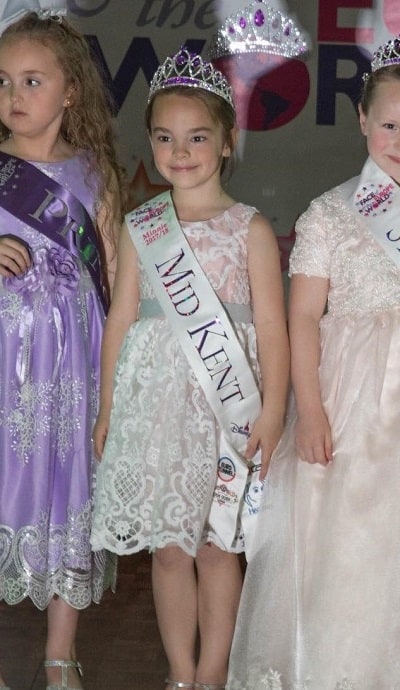 Mum Isabella said: “While she is involved in the pageant and representing the face of Mid Kent she will be raising money and awareness for Headway.

“We have got lots of events coming up throughout the year including a charity disco at the end of this month.”

St Mildred’s infants held a Hats for Headway day on Friday, with pupils and staff their favourite or funniest hat to school in return for a donation for Headway.

The disco will take place on May 27 at Bugsy’s Bowling alley. The venue is part-owned by Aeryn’s nan and grandad and so will help support the youngster’s charity bid.

The event is from 5pm to 7pm and will include DJ, hot food buffet, games, and squash. There will also be candyfloss and glitter Tattoos on sale as well as a lucky dip and raffle.
Tickets are £5 per child

Accompanying adults and Under 2s free but a small donation on the night would be greatly appreciated.

Tickets can be collected from the reception at Bugsy’s. For those who can’t get there to collect them, message the event page here for other options.

Headway is the pageant’s chosen charity. Find out more about the services they offer here