For the first time since World War Two live music has been performed in The Ramsgate Tunnels.

Kent’s premier swing band, The Beverley Big Band, took to the floor for an afternoon of swing and memories today (May 19).

During the war A.B.C.Kempe, Ramsgate’s famous ‘Top Hat Mayor’, would bring his ‘Troopers’ troupe of entertainers into the tunnels to entertain the shelterers and those living underground in ‘Tunnel Town’. There were also musical events to raise money for the famous ‘Spitfire Fund’, with the tunnel dwellers and their friends making a significant contribution. 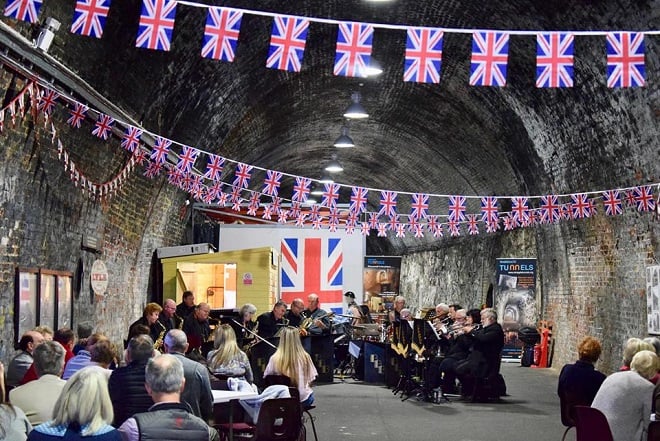 The afternoon was full of tunes made famous by such household names as Glenn Miller, Tommy Dorsey, Benny Goodman, Count Basie and Duke Ellington, many of which had the almost capacity crowd up and dancing. After the concert guests were able to wander round ‘Tunnel Town’ (normally only available on guided tours) to see just what conditions were like in the tunnels during the war.

Many then took a look in the new museum with its displays ranging from the Zeppelin raids of World War One to the reopening of the tunnels in 2014.

A Tunnels spokesman said: “The concert was a great success and it won’t be long before the tunnels resound to more live music.”

The third and last talk within the series will examine the contribution of Ramsgate within what Churchill later described as a ‘miracle of deliverance.’

With Ramsgate being only 28 nautical miles from Dunkirk it came to the forefront in planning for the evacuation. Over the critical nine days Ramsgate safely received and dispatched some 39,848 allied servicemen, playing its own part in the contribution to the miracle. The focus of the talk itself will range from the efforts of the little ships to the sacrifices of the town’s population, who rallied round and provided aid and comforts for the returning troops.

Suitable for ages 16 and over