More than 1200 cyclists took to the countryside of east Kent on Spring Bank Holiday Sunday for Pilgrims Hospices annual Cycle Challenge.  Early indications show the event will raise over £100,000 for vital hospice care.

The challenge is a firm favourite with regular cyclists and Pilgrims supporters.  The teams of families, friends, cycle clubs, from local businesses and services throughout Kent, took up the 45, 75 or 100-mile bike ride on the hottest early May bank holiday since the holiday was introduced in 1978. 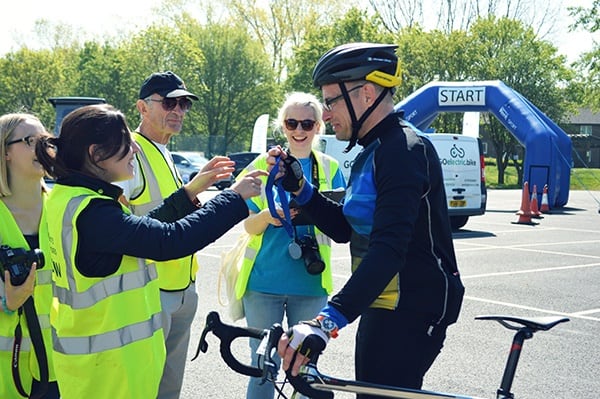 The first rider back from the 45 miler was Giuseppe Chivilo from Ramsgate (pictured), he crossed the finish line at approximately 10.46am and his ride time was 2 hours 54 minutes.

All routes started from, and finish at, the Pilgrims event village at the University of Kent, near Canterbury. Cyclists enjoyed browsing a variety of stands, bike mechanics, sports massage, local cycling interest groups and refreshments.

This year LanMax brought along a truck for people to climb and take a bird’s eye view of what a driver can see around them when on the road.

Simon Smith, HGV driver from LanMax said: “This is a great opportunity to share awareness with cyclists at all levels.

“As drivers, we all take awareness training to ensure we have cyclist safety in mind at all times.

Regular cyclist Ian Ashton, Pilgrims Hospices Catering Services Manager (pictured below), said: “What a lovely day it was for a very good cause. 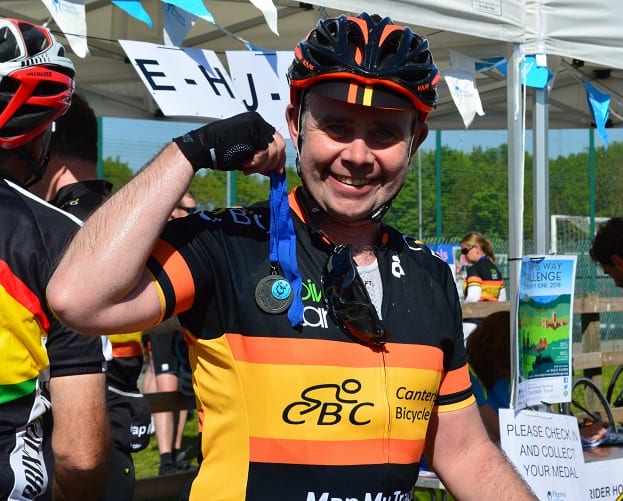 “I cycle this event every and it was great to see such a very large turnout.  This event grows year on year with such well-planned routes, it’s so well organised, it’s a must do for club cyclists.”

Robert Grew, Pilgrims event organiser, said: “It was unbelievable to see such a strong show of support for Pilgrims! 1,238 people joined us in the beautiful sunshine to take on the Cycle Challenge this year. It’s a privilege to organize the event and, seeing it year after year, I’m always reminded how much of a team effort it is.

“Our army of volunteers are just outstanding and gave up their bank holiday weekend to help make the whole experience safe as enjoyable for our riders. I can’t thank them enough. Nor the waves of cyclists who puff their way around the course in support each year – fingers crossed most of you conquered Stowting Hill! And lastly, a huge thank you to our business supporters who help the event to raise as much as possible towards our end-of-life care.”

Dr Jonathan Langworthy, recently retired from a Cliftonville surgery, was tired, sore, yet elated when he got home last Sunday. He and more than 70 other cyclists had just returned from a 250-mile cycle ride through Northern France. Their gruelling journey was in aid of the Halow Project which aims to create opportunities and support young people with a learning disability so that they are able to live independent, meaningful, fulfilled lives and become integrated into their local community.

The riders, including Patron Damon Hill, raised between £80-£100,000 including £1,000 from Dr Langworthy’s own sponsors. Jonathan told Academy FM: ‘Like many of the riders, I have a personal interest in the aims of this charity. It was good to get fit then complete the challenge within 3 days, but I will never again agree that Northern France is flat!’. Go to www.halow250.org.uk to find out more or give to the charity. 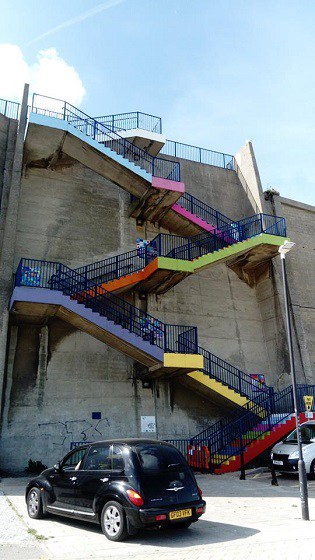 On Saturday, May 26, Thanet Business Network will be climbing Everest (or its equivalent 8848m height) to raise funds for EKIDS (East Kent Independent Dementia Support).

Organised to coincide with National Dementia Awareness Week, it’s a fun way to raise funds for a great local #charity.

Location: The Augusta Steps in #Ramsgate (near the Wartime Tunnels)

You can help by:
• Sponsoring the climbers via their fundraising pages:
GoFundMe: https://www.gofundme.com/TBNEverestChallenge
JustGiving: https://www.justgiving.com/campaigns/charity/ekids/tbneverestchallenge
• Volunteering as support crew – counting steps, rattling collection cans, handing out water and mopping brows!
• Coming along to cheer them on

A volunteer crew member at Margate RNLI lifeboat station has had a vital part of their crew training funded by Lloyd’s Register Foundation.

The course sees volunteer crew being trained in a variety of crucial subjects such as how to ‘abandon ship’ with a 4m jump into water, team survival swimming, coping in a liferaft in simulated darkness, how to right a capsized inshore lifeboat, and the importance of lifejackets. It also covers emergency fire theory such as how to deal with fires aboard lifeboats, and practical sessions on the correct use of flares, fire extinguishers and throw bags.

Training took place in the Sea Survival Centre at the charity’s college, which includes a 25m wave-generating survival tank, allowing trainees to experience first-hand some of the scenarios they may encounter at sea should they ever need to abandon their lifeboat.

The training was funded by Lloyd’s Register Foundation, a charitable foundation that helps to protect life and property by supporting engineering-related education, public engagement and the application of research. The Foundation is committed to funding the RNLI’s Crew Emergency Procedures course for a second 5-year period until December 2020. This additional funding of £1.06M will bring their total support for RNLI crew training to just over £2.46M*.

David Knaggs, Lifesaving Delivery Training Manager at the RNLI said, ‘We are so grateful to Lloyd’s Register Foundation for choosing to fund this vital part of our volunteer crews’ training.

“Their support is hugely important to us, and it’s fantastic how many of our crew have so far been able to benefit from Lloyd’s Register Foundation’s support of their training. This training is crucial in helping keep our volunteers as safe as possible whilst carrying out rescues. It gives volunteers the confidence to save lives even in the most difficult conditions.’

This donation is the latest in Lloyd’s Register Foundation’s relationship with the RNLI, which was recognised in 2010 when it received the Group Supporter Award from HRH Prince Michael of Kent in recognition of its valuable support of the charity.

The RNLI provide personal protection equipment in the form of protective clothing for both their seagoing and shore-based volunteers, but some duties require more basic protection.

Thanet-based builder WW Martin was approached by Derek Amas one of its employees who is also one of the lifeboat’s second coxswains and the company stepped in to provide funding for protective work overalls for the station’s 30-odd volunteers. WW Martin Ltd contributed £250 with a similar amount donated by WW Martin Civils Ltd. The amount was also topped up by a generous £50 donation by Anthony Glew of Glew Fencing Ltd.

Ian Posnett, Director, WW Martin Ltd said: “The commitment and hard work shown by all of the crew at Margate Lifeboat Station is commendable, the passion and commitment they show in their roles is admirable and on behalf of WW Martin I am delighted to support their work”

Peter Barker, Volunteer Lifeboat Press Officer, Margate Lifeboat Station said: “Support from the local community is crucial for us to carry out our voluntary work and this seemingly simple item of equipment will help prolong the life of the more expensive specialist PPE when carrying out basic duties around the station. We are very grateful for the support of WW Martin.

Following the successful event, Thanet’s Freemasons chose to divide the total amount raised between Margate, Ramsgate and Whitstable RNLI lifeboat stations amounting to a very welcome £637 for each station.

Last Sunday (6 May) at Margate lifeboat station, and following a routine training exercise for the volunteer crew, Terry McGlone, Group Chairman, Thanet Lodges & Chapters presented cheques to representatives from each of the three stations.

Peter Barker, Volunteer Lifeboat Press Officer, Margate Lifeboat Station, said: “On behalf of all three stations we would like to pass on a huge thank you to Thanet’s Freemasons and of course Westgate & Birchington Golf Club who kindly organised the event. It is rewarding for all of us to enjoy the support of the local community for the work we do in saving lives at sea.” 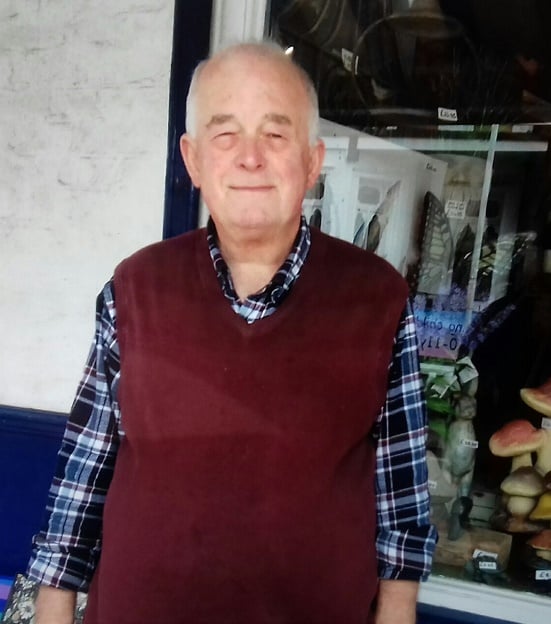 Animal welfare campaigner, Reg Bell has staged a one man protest  outside the London HQ of the Department for Environment Food & Rural Affairs (DEFRA).

Mr Bell protest was because the  Secretary of State for Environment Food & Rural Affairs, Michael Gove,  had failed to respond  to his allegations of widespread and  unlawful exports of live farm animals from Northern Ireland to the EU. The exports were approved by Northern Ireland’s  competent authority, the Department of Agriculture, Environment and Rural Affairs (DAERA) which is ultimately responsible to Secretary of State  Gove.

Mr Bell’s allegations were reported on the BBC’s flagship rural affairs programme “Countryfile” on Sunday 5 May. Mr Bell submitted his allegations, which were based upon more than a year’s painstaking research, to Mr Gove over six weeks ago but has heard nothing since. Mr Bell’s MP, Craig Mackinlay, has also been in touch with Secretary of State Gove but no effect.

Mr Bell said: “I have assembled evidence which demonstrates  DAREA has  frequently and routinely approved  live farm animal export journey logs which I believe contravene EU regulations. The Permanent Secretary of DAREA has been forced to admit this to me. Failure to adhere to EU animal transport regulations means that the animals are very  likely to be  suffering and in distress. I believe this non-compliance to be  widespread and affecting thousands of  animals on hundreds of journeys”.