The site of the former St George’s Hotel in Cliftonville is being marketed with advertising information requesting offers in the region of £4.5million.

The hotel was previously one of three that was operated in Eastern Esplanade by Butlins. The other two hotels, The Grand and The Norfolk, were demolished in 2005/06 with the St George’s clearance then following.

In 2006 planning permission for 87 flats at the site was granted.

In the application it stated: “Regretfully, the operation of the hotel has not proved financially viable. Despite refurbishment of some of the facilities, an extensive advertising campaign directed at coach operators and special marketing incentives, the number of guests has declined and the operating company has lost very substantial sums in the last year of operations. This position is not sustainable and with considerable regret the company has no alternative but to seek redevelopment of the site.” 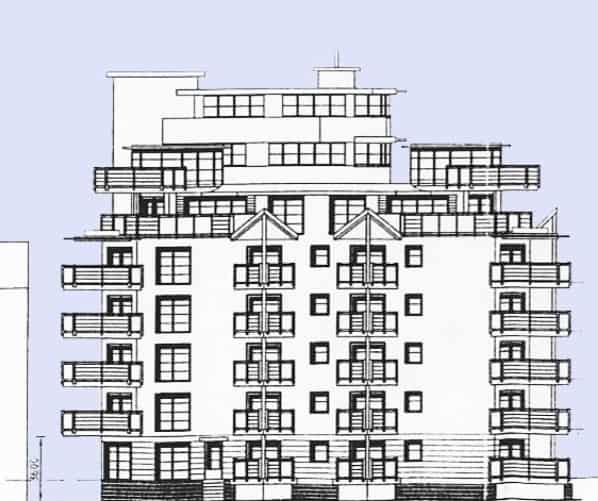 The application also states that flats on the site would “offer unobstructed sea views and an acceptable local environment where the site looks onto the seafront green.”

The one and two bedroom flats would be over six storeys, the same height as the original hotel building.

In the 2006 proposal there were plans for 88 car parking spaces at basement level.

Last year site owner Cormac Dolan gained a certificate from Thanet council showing the planning permission was still valid due to excavation for and construction of foundations being carried out in 2011 before the ‘lapse’ date of June 29 that year.

The site freehold is being advertised by Clarke & Crittendon. Find it here

Butlins on the Eastern Esplanade – a potted history

In 1955 the Butlin organisation bought four of Cliftonville’s large hotels from the Nicholson Group. The Queen’s, previously the Highcliffe, The St George’s, The Norfolk and The Florence, all on Eastern Esplanade. A year later The Grand was added to the portfolio and another year later The Princes. Initially the idea was to have a different clientele in each hotel, ranging from families, retired and elderly and those without children but this didn’t go ahead ahead.

Instead, guests were allocated a hotel and able to use all the facilities in each one.

Red Coats, discos and fast food were on offer. By the 1980s only three hotels were left, The St George’s, The Grand and The Norfolk, with a total of 254 rooms between them.

An underground tunnel was added in the 1990s connecting all the hotels but by 1999 they were sold to a local business man who announced he was to demolish the Grand and The Norfolk for retirement flats, which went ahead in 2005. Later, in 2007, the St George’s was also demolished.

Details with thanks to Margate Local & Family History