Ofsted inspectors have rated Hartsdown Academy as requiring improvement – a drop from the Good grading in its last inspection in 2014.

But inspectors also praised head teacher Matthew Tate, saying his work since he took up post in 2016 was “transforming the school.”

They added: “In 18 months, the head teacher’s resilience and determination have begun to transform the quality of teaching and learning and pupils’ behaviour.”

The inspection of the school, which is part of the Coastal Academies Trust, took place over two days in March with a team of four from Ofsted observing 40 lessons, meeting pupils and talking to lead governors.

The inspectors noted that teaching, especially in science, needs to improve, saying: “Occasionally, pupils cannot tackle work because their reading is too poor and/or teachers do not appreciate their limited vocabulary. Not all teachers take enough account of pupils’ prior learning and set work which is sometimes too easy or too difficult. On occasions, teachers do not explain things well to pupils and as a result, pupils are unclear about their tasks.”

They also said pupil behaviour needs to improve and noted that although attendance is improving slowly it “has a long way to go.”

The week before the inspection, only 40 pupils had 100% attendance and nearly 200 missed at least one day. However, inspectors added: “Tight monitoring of lateness has improved attendance in lessons. The welfare team’s persistence has been most successful in improving attendance of children who are looked after and those who have an EHC plan.”

Inspectors highlighted that in the last three years, GCSE results have been in the bottom 10% nationally but added: “Pupils’ standards on entry to Hartsdown are well below the national average. When the present Year 7 pupils arrived, the great majority of them had reading ages below those typical for their age, and poor skills in mathematics.

“A very high proportion of pupils are vulnerable and/or disadvantaged. An above-average number of them leave and enter the school after Year 7. All these factors inhibit progress and, in the past, have had a negative impact on the school’s GCSE results.”

The report also states that the Sixth Form is “in state of flux while the curriculum is changing. In 2017, only a handful of students took A levels.”

A decision was made to introduce the IB careers programme from September 2017. The inspection team said it was not possible at this time to make a judgement on the quality of Year 12 and 13 teaching due to the small number of pupils present during their visit.

Inspectors were impressed with the care provided for students, saying: ‘Academic and pastoral staff work tirelessly to ensure the welfare of all pupils and students.

“They provide outstanding care for children looked after, pupils who have special educational needs and/or other disabilities, those who speak English as an additional language, and pupils who are vulnerable or disadvantaged.”

The Ofsted team also praised the senior leadership team and middle leaders in the school, as well as the Board of Governors.

The report states: ‘It is clear that the (Coastal Academies) Trust’s executive headteacher and trustees are supporting Hartsdown with much encouragement and practical advice. The trust and other local secondary and primary schools now liaise regularly to confirm standards and progress by assessing work together. They visit each other’s classes and mutually benefit from this flourishing network.”

‘Proud of staff and students’ 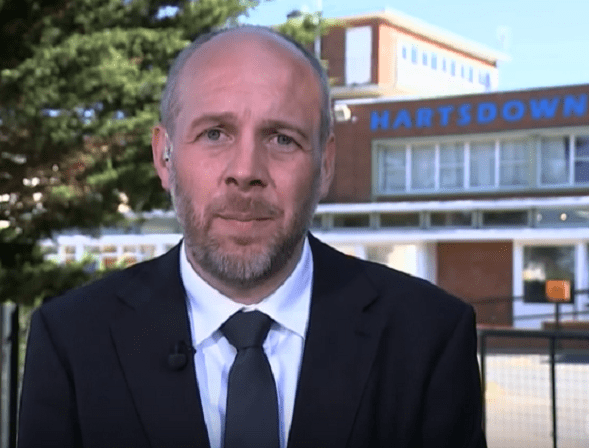 Headteacher Matthew Tate said ‘I am immensely proud of my staff and our students. They have worked so hard to transform the school, in spite of the many obstacles in our way.

“I am also grateful for the support of so many of our parents, who have recognised the need for change if Hartsdown is to meet the standards set for all schools. I am also immensely grateful for the practical support and moral encouragement from the school’s Governing Body and from my colleague headteachers in Coastal Academies Trust.”

Chris Argent, Chair of Governors, said ‘This report vindicates Mr Tate and the firm stand that he has taken over standards at Hartsdown Academy. We have a long way still to go – but I believe that this inspection report provides the reason why the whole community now needs to give its unequivocal support to Mr Tate and to Hartsdown Academy. We should all be proud of the school and the work it is doing to transform its community.’

Paul Luxmoore, Executive Headteacher of Coastal Academies Trust said: “No one should underestimate the enormity of the challenge that any head teacher faces in transforming a school in challenging circumstances and with ever decreasing funding.

“Mr Tate has faced up to the hostility of some parents and elements of the media and stuck to his task with resilience and courage. I am enormously proud of Coastal Academies Trust and the collective responsibility we share for all our students in all our schools – of which Hartsdown is a most valuable and precious part.”

The Ofsted inspectors said the school now needs to make improvements in areas including the quality of teaching and continuing to work on attendance.