The 54-year-old, who has raised over £60,000 over the last four years for Breast Cancer Now, will complete the route whilst singing karaoke and carrying the heavy machine the entire way. Graham began fundraising for Breast Cancer Now after he lost his mother in law to breast cancer in 2004. This year he is aiming to hit his target of £70,000 to fund vital research.

Graham will be entertaining the crowds and lifting the spirits of fellow runners with his music, singing a repertoire of 40 hits including running themed tunes – 500 Miles by The Proclaimers, Born to Run by Bruce Springfield, Run to You by Bryan Adams- as well karaoke favourites I’m a Believer by the Monkees, and Hey Baby by DJ Otzi and I Will Survive by Gloria Gaynor, which Graham says always goes down well.

Graham began running with his karaoke machine after realising that when competing in marathons more competitively, there was fun to be had in the slower groups behind him.

Graham said: “I used to run marathons fairly quickly, but I soon realised that the fun was always two hours behind me. I wanted to do something fun and a bit different, so instead of choosing a costume, I chose karaoke. 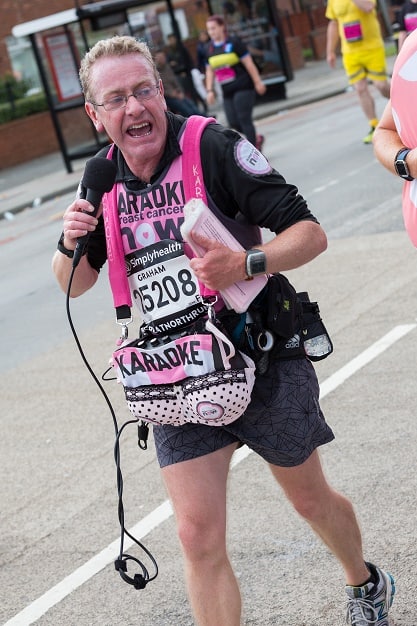 “I’ve always loved music and I always do my training runs listening to music, so I thought I’d give it a go. I absolutely love it – the music lifts people’s spirits and can help pick people up who are struggling. The songs are so well known; every generation knows them, so everyone can sing along. I take requests too, so if there’s something special you’d like to hear, just come and ask”.

“I run at quite a consistent pace, so lots of people call me the karaoke pacemaker – if you’re running a six-hour marathon, it’s likely you’ll find me somewhere, and if you don’t see me, you’ll probably hear me!”

The karaoke machine, which weighs 7lb, consists of a portable amplifier and an mp3 player, and requires multiple battery changes during the course, taking five minutes each time. Graham will spend up to 25 minutes changing the batteries during the marathon.

Graham will continue to run with his karaoke machine until he reaches his goal of £100,000, when he thinks may be the time to unplug his microphone.

He said: “Singing while running takes a lot out of you, and requires a lot of anaerobic training. Luckily I live by the coast so I can run along the seafront singing my heart out. I’ve got it down to a fine art now, but I’m turning 55 this year, and not getting any younger”.

Support his fundraising at virginmoneygiving.com/karaoke-pacemaker