A campaign group aiming to save stroke services at Margate’s QEQM Hospital is urging people to get involved in the last few days of consultation, to push for an extension and to challenge the options on the table.

The NHS in Kent and Medway – which includes all 8 Clinical Commissioning Groups – Bexley in south east London and the High Weald area of East Sussex have been consulting on the proposals.

The consultation closes at midnight on Friday (April 20).

Members of Save Our NHS in Kent (SONIK) say the Ashford hyper acute stroke unit (HASU) plan is the worst option for Thanet.

They are pushing for an extension to the consultation and are fighting to put QEQM on the table as a HASU site. 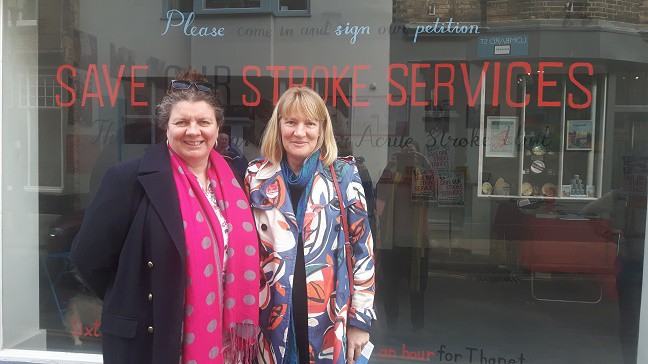 Doctor Coral Jones (pictured above, on right, with a fellow campaigner), spoke at a meeting of Westgate Town Council last week.

She said: “QEQM Hospital to Ashford is 60 minutes and that’s without accidents, other hold ups and a possible ambulance wait of up to 18 minutes.”

She added other options, including QEQM, Maidstone and Ashford hospitals, served the entirety of Kent – with every area of Kent able to get to a stroke unit in under 60 minutes – but claimed these had been dismissed.

She fears the final choices are driven by a need to service the Private Finance Initiative (PFI) debt in hospitals in Dartford and Tunbridge Wells.

She also claims there will be a downgrading of the QEQM Hospital.

SONIK campaigner Carly Jeffrey said: “The problem with this plan is that there is no evidence that it will work and be safe for those with longer journey times. The whole county is being pushed towards a non-evidence based experiment on the people of Kent in which 3 hospitals will lose their stroke units.

“Save Our NHS in Kent believe NHS bosses should never have made the seemingly positive claims that underpin this consultation, and now we are going to hold them to account for it.

“People are concerned about what this means for other services such as A&E, and that is a reasonable concern.

“The two are tangled together. It’s rather peculiar and gives the impression that these consultations are just theatre, and that the decisions have already been made. There are also plans afoot nationally to reduce drastically the amount of hospitals that provide acute care. It’s hard not to see all these things as part of a larger plan to make district general hospitals a thing of the past.”

He said: “I am firmly convinced, as services are currently configured, that Ashford is the right place for the proposed east Kent hyper acute stroke unit, and that it will reduce deaths and long-lasting impairments for the people of Thanet, as well as the wider population of east Kent.”

A spokesperson for the Kent and Medway stroke consultation said: “No decisions have yet been taken about the future of urgent stroke care. We have been consulting across Kent and Medway to hear what people think. We’ll be carefully considering everyone’s views before taking any decision about next steps later this year.

“There is really clear evidence for hyper acute stroke units. They are recommended by the National Clinical Stroke Guideline, which sets out best practice for the NHS in England, and was developed by the Royal College of Physicians based on the evidence of what achieves the best outcomes for stroke patients both in this country and around the world. It has a full list of sources and bibliography setting out the research used in the drawing up of the guideline.

“Stroke staff currently work extremely hard but our services are not consistently meeting national standards and we need to change how stroke services are organised across the county.

“While the options that have been consulted on would mean longer travel times for some people, we expect our proposals to reduce the time between people having their stroke and starting specialist treatment. We believe our proposals would help people get the best possible care during the critical first 72 hours following a stroke, bringing our services in line with the best in the country.

“To draw up the shortlist that went out to consultation, 13 options were evaluated, including seven which had QEQM as one of the sites for a potential future hyper acute stroke unit. The evaluation panel included stroke consultants, nurses, and other staff, and they, along with the Stroke Review Programme Board, assessed the quality, accessibility and feasibility of potential options. The existence of the Private Finance Initiative funded hospitals in Kent played no part in the decision about which options went through to the shortlist.  Our proposals would be supported by a £40million investment in stroke services and are not about making cuts.

“As evidenced by the centralisation of other services in Kent, such as trauma and treatment for heart attacks, which have been in place for many years now, moving a specialist service from one hospital to another does not negatively impact other services like A&E.”

For more information on the SONik campaign go to saveournhskent@gmail.com

Find out more about the consultation and complete the survey by visiting www.kentandmedway.nhs.uk/stroke