Ramsgate  dad-of-one and stepdad-of-two, Rick Howells is getting set to take on the 26.2 mile London Marathon next month (April) to raise cash for Coeliac UK.

Rick is taking on the challenge for the first time and has been training five days a week since September, running some 10 miles a day.

“This will be my first marathon and I hope to finish it in under 4.5 hours and aim to raise £2000 for Coeliac UK come the big day. I am very happy to do my bit to raise awareness of coeliac disease by running the London Marathon. If it means that just one more person thinks that it’s worth getting tested as a result then that would be fantastic!

“It’s great that Coeliac UK will be there cheering for us on the day!” 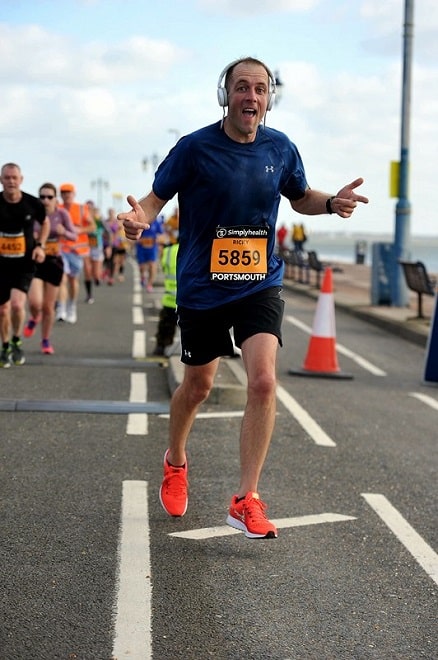 The 42-year-old has been training around the isle and last Sunday took part in the London Half Marathon, finishing in a time of 1:45:10.

He said: “I ran the first London landmark half marathon and what an amazing experience it was. The atmosphere was electric. The crowds cheering, groups dancing, bands playing, it really was something special with 13.1 miles around some rather spectacular London sights.

“My previous half best going by my watch was 1:49:14. I finished in 1:45:10 smashing my personal best by over 4 minutes! The marathon training is really hard right now but clearly it’s doing something! The London marathon is in just under 4 weeks and the training continues. I will give the marathon everything I have.“

The money Rick raises for Coeliac UK will help the charity with research and raising awareness of the illness.

Coeliac disease is a serious autoimmune condition caused by a reaction to gluten, a protein found in wheat, barley and rye. People diagnosed with coeliac disease must maintain a strict gluten free diet for the rest of their life if they are to avoid very serious complications such as osteoporosis, infertility and although rare, small bowel cancer.

One in 100 people in the UK has coeliac disease but only 24% of those with the condition have been diagnosed. There are an estimated half a million people in the UK who have the condition but don’t know it. The charity’s online assessment can be found at https://www.coeliac.org.uk/is-it-coeliac-disease/  for anyone concerned about their symptoms and would like to find out more.

The London Marathon takes place on April 22 with some 40,000 runners taking part. The route starts at Blackheath and finishes in front of Buckingham Palace. The Queen will officially start this year’s race.