It was standing room only at Ramsgate’s Royal Victoria Pavilion on Tuesday, as more than 200 people eagerly anticipated the Archbishop of Canterbury’s arrival.

The appearance was part of a tour of Thanet by Archbishop Welby that has included a session on air at Academy FM, the launching of a beer at The Four Candles micropub anjd visits to schools and churches across the isle.

The Royal Victoria Pavilion event was a Q&A with questions submitted in advance or on the night, then posed by Paul Worledge, vicar at St Luke’s Church in Ramsgate.

The audience had not held back, posing questions across a wide range of issues, local, global and spiritual. Each was met with a compassionate and honest answer. 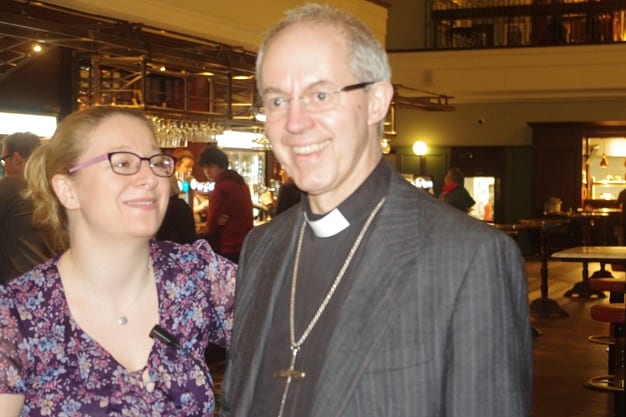 What Archbishop Welby had to say on:

Refugees: We all know that Kent has had to absorb more than the national average of refugees. Over past centuries, Britain has been enriched by welcoming refugees and immigrants. Nationally, it needs to be recognised that communities, as well as the refugees themselves, need to be supported.

The housing crisis: We are told to expect a massive and rapid programme of building homes to satisfy the huge need. Everyone involved needs to recognise that it is communities, not just houses, that need to be built.

Homeless and rough sleepers: It is not only those out on cold streets who need help. The many people in temporary or sub-standard accommodation need to be relieved, too. The Church and all its people need first to pray for relief. Then probably protest aloud – writing to local MP’s and other decision-makers to urge attention. Initiatives like the Thanet shelters over the winter months provide some short-term relief, but remember that accommodation in a cluster of 7 churches needs about 200 volunteer helpers to make it work.

An increasing suicide rate (particularly in men): Suicide is linked with mental illness. It needs treatment, just as a broken arm needs treatment, but mental illness is invisible. As a family, we have had to learn about the causes, effects and caring for depression and mental illness. Churches and communities must be open, allowing people to talk about their illness. Isolation and suicide often go together. At St George’s, we enjoyed a community lunch and many of the people live alone. We should try to do more of that, to bring people together in a loving and supportive environment.

The marriage of divorcees (particularly Prince Harry and Meghan): Remember that I haven’t only sanctioned that particular wedding, I’m also officiating! The Bible is clear about God’s purpose in bringing two people together and it should be for life. But all humans are imperfect, make mistakes. Between 1948 and 1968 the Church grappled with this issue. The final position was that things go wrong in people’s lives, but they shouldn’t be punished for ever. Jesus said that, to follow Him, we have to be born again, renewed. It has to start with distance and self-awareness. I want to start with mercy, not judgement.

Where you and the church stand on LGBT and same-sex marriage: The Bible is the authority, if properly interpreted. Biblical references have in the past been used to justify acts we would be ashamed of today, like slavery or kicking indigenous populations off their land. When I get judged, I fully expect to be told I’ve got plenty wrong. You cannot treat people as categories. LGBT are not a problem, they are people. God loves them as individuals, just as He loves you and I. I also value LGBT as I value myself or others. I do not think of them as more sinful than me. I am very reluctant to judge.

What role the church is playing in world conflict: In the few years since my ordination, my wife Caroline and I have travelled through all of our 39 Provinces across the globe. Many of these are embroiled in conflict of some sort. For example, we were in South Sudan at a time of bitter conflict and appalling loss of life, our church leaders included. We have consistently seen that the Church builds bridges towards mediation and reconciliation, some of these objectives taking years to achieve. The problem with being a bridge is that people walk all over you… Through our ‘Reconciliation Leaders Network’ and ‘Women on the Front Line’, we are training many people towards fulfilling our commandment to love one another. There is a senior group in the Church who are conducting a major study across 4 key questions, with a full report by February 2020. Those 4 questions are:

How you want to be remembered as Archbishop of Canterbury: I think I’d like to be remembered as ‘the unlikely Archbishop’. When I felt my calling, I had to be interviewed before being accepted for training. I was told “I’ve interviewed over one thousand people for ordination and I have to tell you, you are not in the top thousand. You have no future in the Church of England.” There is a tribute inscribed next to the tomb of Archibald Tait, Archbishop from 1868 to 1882, which says he made the Church the Church of the People. That is a good goal to pursue. If I can influence Churches and Church Schools to become even more inclusive, supportive and loving, then I will be happy.

Has the true meaning of Easter been lost?: Easter is less commercialised than Christmas, thank God. Easter commemorates the greatest event in history, the documented raising of Jesus from the dead. We need to celebrate, not commercialise.

What is your prayer for the Church of England? Put simply, for unity. Read John, Chapter 17, Verse 21. When the Church is united, people are drawn to the Spirit of Jesus. We can disagree, but we still love one another, because we know we are loved by Him. 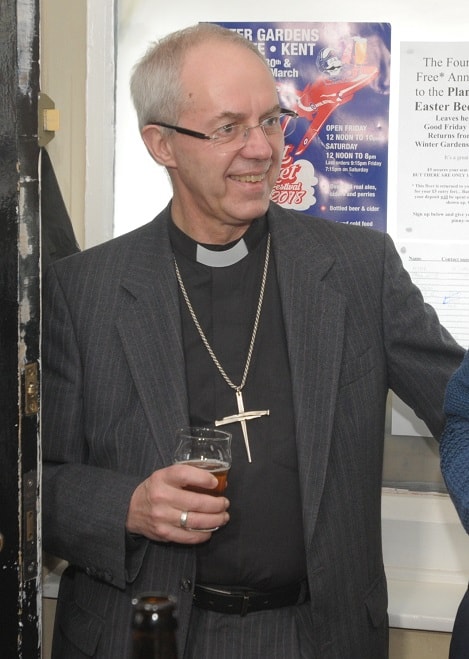 Members of the audience say they were charmed by Archbishop Welby’s natural blend of honesty, humility and self-deprecating humour.

Katherine Parker-Vaughan, who was there with husband Ronnie Vaughan (President of Thanet Rotary Club),said: “It was wonderful to hear such open, honest and personal answers to some really tricky questions covering just about everything people have on their minds just now.

“His compassionate approach to major world problems showed how the Church has an important role in facing up to these problems and I just hope that other world leaders listen and react as well as tonight’s crowd did, to his wise and inspired words. I was certainly inspired and reassured.”