Thanet made only two changes to the squad that lost narrowly at Aylesford a fortnight ago with Sam Rolfe and Jay Morbey returning. Tom Walton,17, made a first start at scrum-half.

The pitch was in excellent order and with a touch of spring in the air conditions were ideal for rugby.

The visitors kicked off down the slope and were quickly into their stride pressuring Wanderers into errors before, with only three minutes on the clock, they went over for a try that was unconverted. Thanet were surprisingly subdued in early exchanges and it took a spark of energy from the ever alert Warren Riddell-Bloomfield to ignite the flame. He was there to charge down an attempted clearance  before shepherding the ball over the line and touching down.

Rolfe added the extras for a 7-5 lead. A series of penalties upset the rhythm of the match before Morbey broke the gain line, sucking in the defence before throwing a nicely weighted pass to power house winger Charlie Knight who shook off the remaining defenders to race in and make it 12-5. Hastings missed a fairly straightforward penalty attempt but as Thanet’s penalty count climbed the initiative was mainly with the visitors. 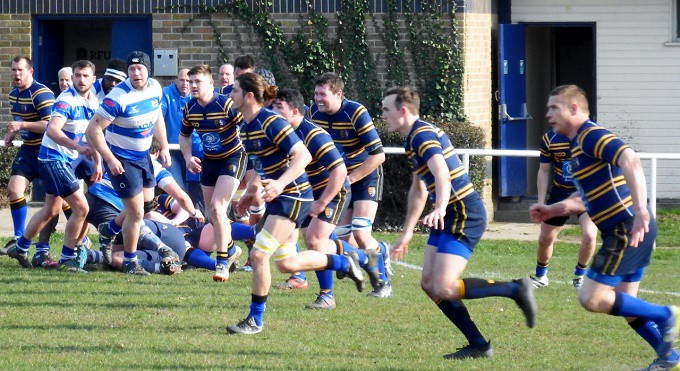 After a very promising half an hour Walton  made way for Lewis Stone who was quickly into action with a terrific try saving tackle. A further penalty attempt was successful for Hastings before fly half Nick Herbert combined with Isaac Roe to provide the  highlight of the match. Receiving quick ball Thanet’s 10 opted to cross kick and the perfectly judged kick was plucked from the sky by the right wing who rounded the defence to touch down and Rolfe’s conversion gave Wanderers a 19-8 lead at the break. 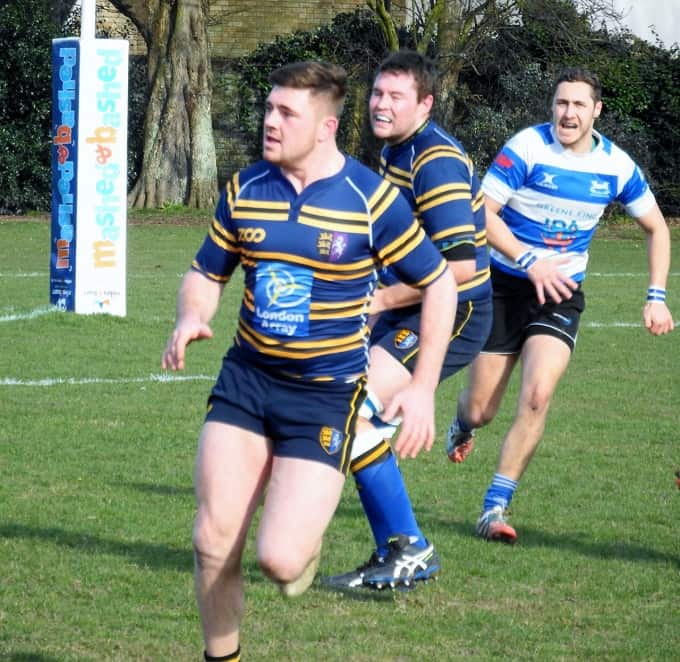 Knight went close in the first minute of the second half but shortly after Morbey was shown yellow  following a team offside warning. Hastings worked hard to take advantage of their extra man advantage but good improvisation from Thanet particularly at set pieces meant Wanderers were not disadvantaged by being a man down.

When Hastings No 6 was shown yellow with around fifteen minutes remaining Thanet ramped up the pressure. A series of scrums taken instead of kicks for goal led to several close calls before a final surge saw Wanderers number eight Andy Letts claiming the try after an unanswerable forwards effort. Rolfe made it 26- 8.  Peter Macaulay who was on from the bench put in a big tackle and marshalled the defence to snuff out a late Hastings attack. Knight, Morbey and Letts led a breakaway that brought some excitement to the closing seconds before referee Simon Bingham blew for time shortly afterwards to bring a largely disappointing encounter to a close. The lack of excitement on the pitch was soon replaced with elation in the clubhouse as it became plain that the return to London 2 South East was certain after a tough seven match campaign.

Head coach Tom Carlier described the game as frustrating but was delighted that the five points gained had proved enough to gain promotion for next season . Andy Letts had a great game at eight using his experience to great effect and capped it with his seventh try of the season to become Thanet’s man of the match.

There is no senior rugby planned for the Easter weekend. The next fixture is away at Bromley on April 7, kick off at 3pm. 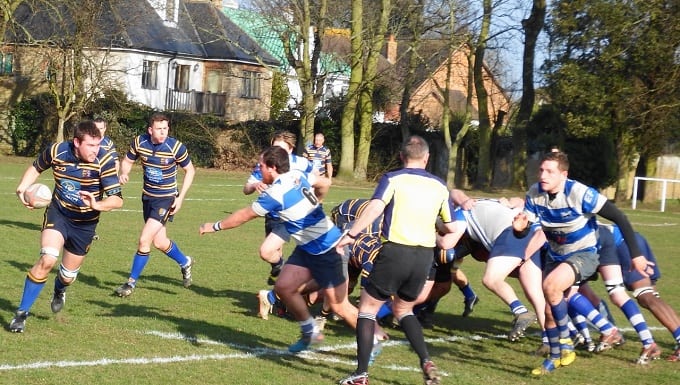