A piece of World War Two history is tucked away in the Poundland store in Ramsgate High Street.

Pictures drawn on to the wall on a stairwell in the building are thought to show aircraft bombers which volunteers needed to keep a watch for during the conflict.

Merchandiser Sharron O’Connor shared a photo to social media after spotting them while making a delivery this week.

Sharron said: “It’s drawings and descriptions of planes. Apparently, the fire brigade used the building in the war to spot enemy planes to warn the air force of an attack.”

The drawing in Sharron’s photo seems to show two DO 17 German bombers and a Wellington British bomber craft,

There is also a reference to Canterbury Cathedral School of Music.

The images were created during the war for the Royal Observation Corps (or ‘fire watchers.’) so they knew exactly what they were on the look-out for.

The Royal Observer Corps (ROC) was a civil defence organisation intended for the visual detection, identification, tracking and reporting of aircraft over Great Britain. It operated in the United Kingdom between October 1925 and December 1995, when the Corps’ civilian volunteers were stood down.

Volunteers would be posted on strategic sites, often a roof, to spot incendiary bombs.

Many thousands of fires were prevented or outbreaks extinguished by members of the public who were coordinated by local authorities and worked in liaison with the fire service and air raid wardens. 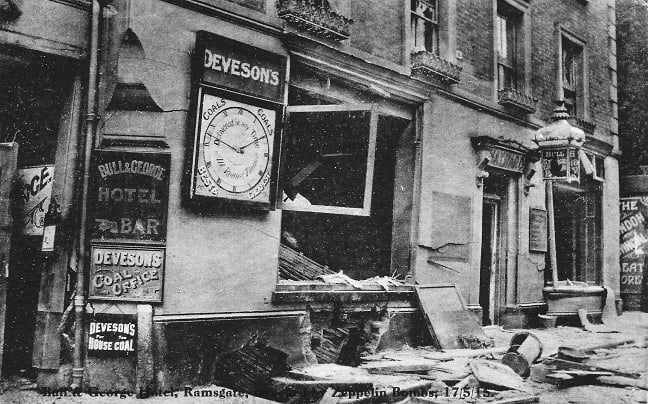 The building was formerly the Bull and George Hotel, which was bombed during the Great War conflict (shown above). Two high-explosive bombs dropped by Zeppelin LZ 38 passed through the building and detonated on the ground floor at around 2am on 17 May 1915, killing two guests.

A frieze from the old hotel still survives in the shop’s stockroom today. The building was also a Woolworth store until it shut down on December 28, 2008, after the chain collapsed into administration.

It is hoped that the drawings can be preserved. Initial contact was made with the  Imperial War Museum although store staff are still waiting to hear from them.

The Isle of Thanet News has also contacted the Spitfire Museum at Manston to see if the drawings can be authenticated and documented.