The seafront shelter, former toilets and lift off Victoria Parade at Viking Bay in Broadstairs will become a boutique coffee house.

Work has started at the site, bought for a whopping £350,000 at auction last October, and a planning application has been submitted to Thanet council by property owner Justin  van Oortmerssen.

Mr Ootmerssen says the business will be called The Furnicular Coffee House: “ (in) tribute to the Broadstairs funicular, the steepest funicular in the UK and one of only three left in the country of its kind.”

The Broadstairs Cliff Railway (funicular) was built in 1910 and designed to take 12 people in a single car from the top of the cliff down to the beach.

The lift was closed in 1991 due to disrepair. Its operation was unique in being counterbalanced by a concrete weight travelling in a brick lined shaft. Until recently it was the UK’s steepest surviving tunnelled funicular lift.

In his application to the council Mr Ootmerssen says: “My proposal will involve the creation of a boutique ground floor coffeehouse – cafe called ‘The Funicular’.

“The Funicular will provide high quality coffee and snacks as well as ice cream. The name of my cafe is a tribute to the Broadstairs funicular, the steepest funicular in the UK and one of only three left in the country of its kind.

“ I believe the following changes will improve the immediate area as well as the vista of the Viking Bay. The works will involve the cleaning out of the existing indoor area, including the removal of any outdated electrics and plumbing.

“The installation of modern electrics and plumbing as well as a service counter with barista station, food preparation area and indoor seating is proposed.” 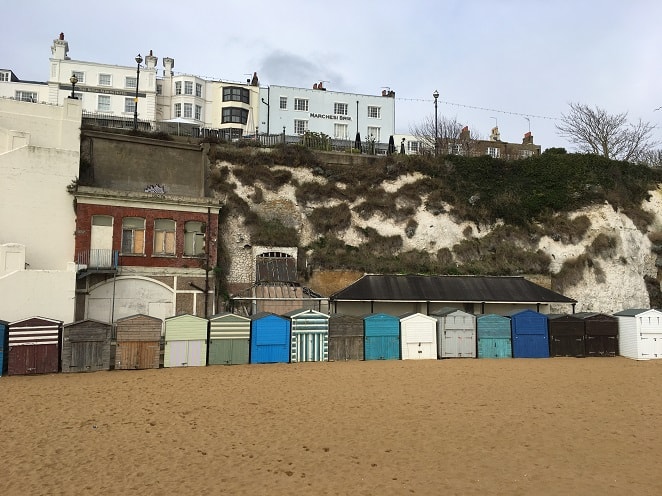 There will also be outdoor seating and ‘period sensitive timber shutters for security reasons on the entrance of the ground floor.’

Thanet council sold the freehold for the site, which comprises an area of open land together with the disused lift shaft and toilets at split level, as part of its asset disposal programme.

The guide price originally given by auctioneers Clive Emson, was £40,000- £50,000 plus fees but the hammer finally came down at 7 times that price.

The planning application was submitted last month. A decision is yet to be made.

With thanks to Broadstairs history for funicular details