Hundreds of people have joined the hunt for an 8 month old kitten who went missing from Westgate during a battering storm last month.

Some 400 leaflets and posters have been circulated across Westgate and Westbrook in the search for ginger tom Teddy.

Owner Catherine Whitehead is desperate to find the kitten, who had already had a rough start in life after being dumped in St Peter’s graveyard when he was just three months old.

Teddy was found by a dog walker and taken to Thanet Animal Group (TAG). From there he was adopted by Catherine to live with her and cat Toffee in her Beach Road home.

Catherine said: “On the night of the storm he went out of his cat-flap and I think he got disorientated and bolted. There were sightings in the first week he went missing, one man saw him on his driveway in Westbrook. A 100-year-old lady, Olive, saw him on the green and said he was playing and not bothered by the dogs. He got on with my dog so he isn’t afraid of them. 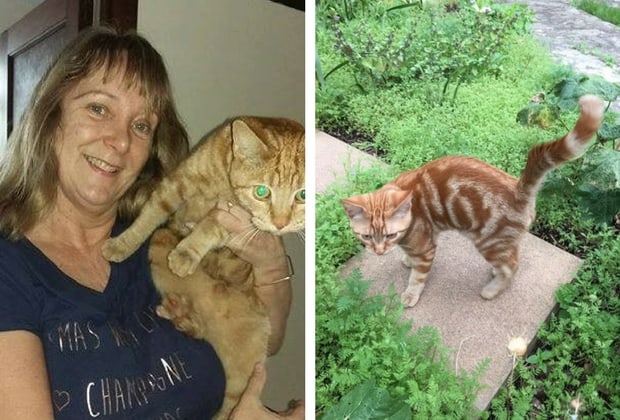 “After the first sightings there was nothing but I am encouraged now that someone spotted Teddy a couple of days ago by the bridge between Westgate and Westbrook.”

The search so far has involved knocking on hundreds of doors, a facebook group launched by friend Carolyn Neilson and an appeal on Radio Kent.

Businesses in Westgate and Westbrook are displaying posters and residents are on a constant look out for Teddy. Catherine even took out a trap from TAG but ended up catching someone else’s moggy.

Catherine said: “One man goes out with a photo of Teddy in his pocket to search every night. So many people are helping.”

Even North Thanet MP Sir Roger Gale and wife Suzy have got involved to help with laminating the posters.

Catherine said: “It has been quite upsetting but I am feeling very encouraged by the latest sighting. I just need to get him home.”