Twenty homes are likely to be built on agricultural land at Monkton.

An application for the properties on land between 47 And 71 Monkton Street, made by Sunningdale House Developments Ltd, will be discussed by Thanet council’s planning committee tomorrow (February 14).

The application is for permission to build on a 0.8 hectare site at the edge of Monkton village. The site is currently open agricultural land and is on the northern side of Monkton Road.

To the west of the site is a recently constructed residential development of 8 homes that was on previously developed land. To the east of the site is Walters Hall Farm, which contains a Grade II Listed building.

In a design proposal drawn up by architects Giarti, it says: “The proposal seeks to provide a mix of detached, semidetached and terraced dwellings, totalling 20 units.

“The proposed dwellings are traditional in form but varied in style, maintaining the same character that forms the varied street scene along Monkton Street. Materials are typical of those found at other dwellings along the street including brick, timber boarding, painted brick and clay roof tiles.

“A new access road is proposed off Monkton Street, which will allow access and turning for refuse and emergency vehicles. The newly built pavement to the west will continue across the front of the site to provide pedestrian access. Parking spaces have been provided at 2 per dwelling, with an additional 0.2 spaces per dwelling for visitor parking.”

Six properties will be ‘affordable’ and 3 built to lifetime standard. 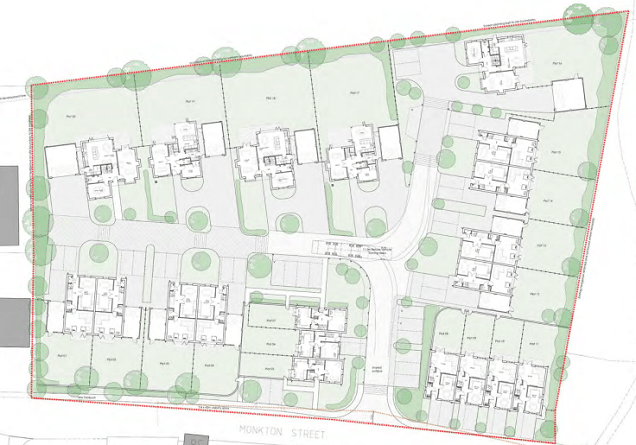 The development will be made up of 12 four-bed homes, 5 three-bed and 3 two-bed dwellings. There will be seven terraced dwellings, eight semi-detached and five detached.

Twelve letters of objection have been received by Thanet council.

Monkton Parish Council said it had no objection to the development in principal but there were concerns regarding the location and impact on the surrounding properties.

These include an increase of traffic on a narrow country rod and an increase in housing putting extra pressure on the drainage and sewerage amenities.

Developer contributions will be:

£10,686 towards the Special Protection Area,

£22,320 towards improvements within primary care by way of an internal reconfiguration and upgrade of Minster Medical Practice, –