Dan Thompson is the artist-in-residence on the dig at the Margate Caves site in Cliftonville.

Dan is sharing his diary of the dig with The Isle of Thanet News. Yesterday he was off-site but returned today (February 9) for day five of the excavation.

The Margate Caves Dig Diary could easily become just a log of the Isle of Thanet’s weather. Today started in heavy rain and strong wind, but as it cleared, volunteers returned to the site.

The last day with Rob and his mechanical digger on the site saw a huge amount of topsoil shifted, showing the ancient ditches dug into chalk really clearly.

A number of holes appear to be rubbish pits, so it’s hoped that careful excavation will uncover more finds. Meanwhile, the back wall of Bryan House can be seen much more clearly. A drop to a cellar window was dug out, and amongst the rubble we found smashed-up pieces of what might be a marble fire surround.

There are also lots of fragments of cast iron drainpipe, painted green. It’s clear that most of the bomb-damaged house has collapsed (or maybe was pushed) into the building’s cellars. 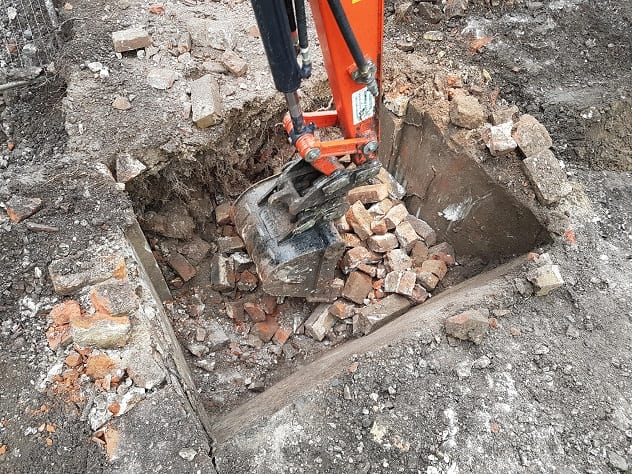 It’s incredible that the Minton tiled floors we’ve found survived! Other than that, the only reminders of occupation are smashed Victorian and 20th Century pottery, and broken clay pipe.

The archaeological team have been so moved by the community’s enthusiasm, they’ve decided to open the site to local people who want to help this weekend. Just turn up at the site from 10am, Saturday or Sunday. Children can have a go if accompanied by an adult.

I’ll be away from the site (with my exhibition From Wasteland To Wasteland at Lombard Street Gallery and poetry at Turner Contemporary) – but I’ll look forward to seeing what you all uncover!