Dan Thompson is the artist-in-residence, leading the dig at the Margate Caves site in Cliftonville.

After two days with a small team on the Margate Caves site, the site became something else entirely on the first day of the community dig.

Fifteen volunteers joined the professionals today – and while some were experienced amateur archaeologists, most weren’t. A mother and daughter joined, fulfilling mum’s ambition that had been put on hold when she became a parent.

Another local, a Time Team fan, had always wanted to have a go. One man, who had worked in the building trade, had regularly had to wait for the archaeologists to stop before he could start – and wanted to see the other side. 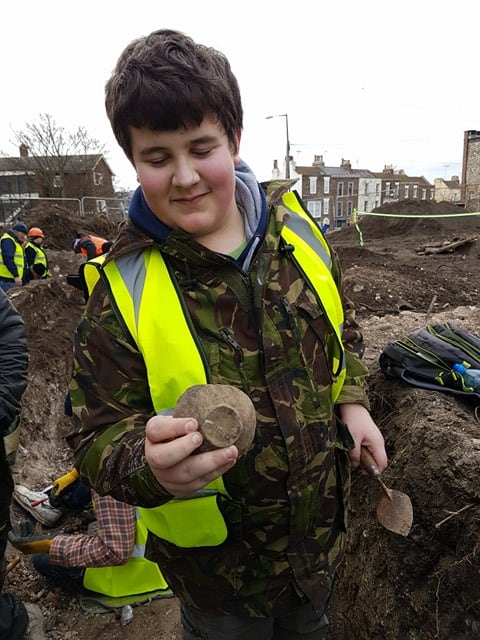 Twelve-year-old Edward is a keen historian – and found the base of the second Iron Age pot found on the site, and a third Minton-tiled floor.

Overall, the massive increase in people-power meant that more of the main trench was opened and cleaned. Iron Age ditches stand proud of the chalk natural, and Bryan House’s walls and a flagstoned courtyard are becoming clearer. There’s a lot of animal bone, some small pottery finds, and plenty of pieces of broken pipe stem.

The second trench has been opened and is so far find-free. There was a lot of loose chalk, which may be left over from the Caves original use as a chalk mine. Edward’s were the best finds – although the bottom half of a Reeves stone jar is a good local find.

Interviewed at the end of the day for ITV Meridian, I held up the Iron Age pot base and the Reeves bottle, to show that the whole of Margate’s history is on this one small site.

A history the new Margate Caves visitor centre will be able to tell through the finds from this important archaeological excavation.