There was a relatively settled look about Thanet’s squad with only two changes to last week’s eighteen. Fit again Neil Wakefield resumed at hooker and Kieran Wright was back on the bench.

Wanderers did not play well in the away fixture against Williamsonians (OWs) which resulted in them losing to a last minute try, one of only two losses this season.

It was then a fully motivated Thanet side who kicked off down the slope. Despite a tentative start with a couple of poor options chosen, Warren Riddell-Broomfield secured a good turnover and a Nick Herbert’s boot set a line-out close to the clubhouse. Thanet’s pack executed a text book catch and drive with the maul hurrying to the line for Riddell-Bloomfield to touch down. Sam Rolfe’s fine conversion made it 7-0 after 5 minutes.

Danny Clement spearheaded an attack and when OWs went offside at the breakdown Rolfe made it 10-0 with a penalty. Thanet’s pack was really fired up with Joe Carlier and Andy Letts at their rampaging best and giving the visitors all sorts of problems with quick off loads and powerful drives.  Wakefield was on imperious form and he claimed a try as did Brett Scott in a three minute spell before a quarter of the match was over. OWs took advantage of some generous Thanet defending to break through and score near the posts to make it 24-7 ten minutes later. 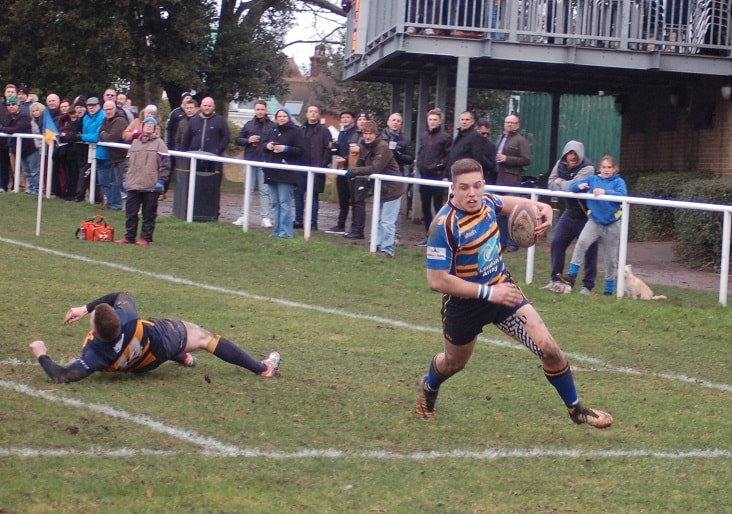 A superb double tackle by Scott and Riddell- Broomfield took the wind out of a visiting forward as he unwisely tried to run through the dynamic duo from the restart. Wright came on for Arek Arkadiusz who had a bloody nose to show for a lively performance in the engine room.  There was urgency in Wanderers’ backline with Nick Herbert at ten today orchestrating fine movements from forceful centres Jay Morbey and Stuart Plumridge. Isaac Roe started on the right wing and was unlucky not to score before left wing Charlie Knight also went close.

Wakefield took one against the head but the subsequent attack was held up. OWs defence held firm aided by some white line fever until 35 minutes when Knight was presented with a one on one and there was only going to be one winner as he touched down to make it 29-7 at half time. 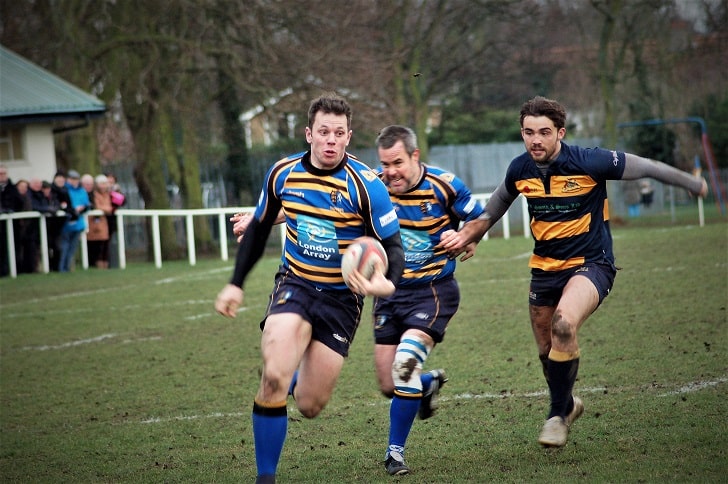 OWs opened the second period strongly but some booming tackles kept the home line intact until the home side found themselves at odds with the referee’s interpretation of the laws at the breakdown. A series of penalties and a stern team warning to Thanet was followed by the visitors’ second try and 27-12 after only five second half minutes. Callum Doody had been impressive and was unlucky to receive the yellow card. He was replaced at scrum half by Rolfe who did well in an unfamiliar role.

Some good defence and Herbert’s clearances helped to keep the scores unchanged during Doody’s absence. Decisions against Wanderers at the breakdown were causing frustration within the home side and Head Coach Tom Carlier wisely instructed his side not to compete in that area. Jay Sanford replaced Danny Clement at loosehead where he’d been a real live wire.

OWs now went down to fourteen and the host side quickly benefited with Adam Gaddes touching down after another strong forward drive with Rolfe once more converting well. OWs hit back with an unconverted try before a Wanderers’ penalty set them up thirty metres out. An attempted OWs clearance was gathered by Rolfe who ran back to set an attack which was finished by Scott for a well earned double. Peter Macaulay was his reliable self in a few minutes off the bench. 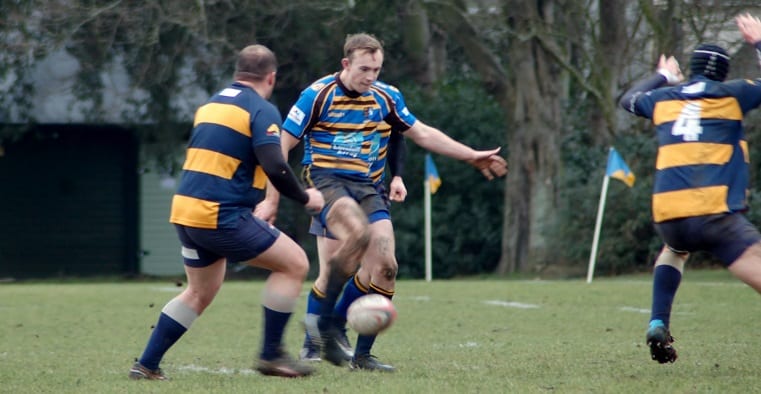 OWs hit back with a converted try for a  deserved bonus point and a 43-24 final score. Tom Carlier was very pleased with the way his side executed the game plan and with the win in a demanding match against a side with an impressive defensive record. An excellent team performance  produced six tries with five scored by forwards compared to five out of six from backs last week. The back row was the lynch pin of the victory with Riddell-Broomfield again the coaches’ choice as man of the man. Back in the six shirt, he covered miles, tackling, making yards and linking play.

Report by Colin Whiteley and Pictures by Ollie Cackett