Dan Thompson is the artist-in-residence with the dig at the Margate Caves site in Cliftonville.

The second day of the archaeological excavation above the Margate Caves started with two beautiful finds. In the first 30 minutes, archaeologists Dan and Jeremy excavated part of the jawbone of what’s thought to be a horse, and a collapsed Iron Age pot.

Thick, rough and made of black clay, the pieces of the pot are beautiful to hold. After conservation the pot will be returned to the Margate Caves Community Education Trust, for possible exhibition in the new visitor centre.

Continuing to pull back the site’s topsoil revealed a number of Iron Age ditches cut into the chalk – further excavation might find more pot in them. Elsewhere on the site, more of Margaret Bryan’s old schoolhouse is becoming visible. The entire back wall of the building has collapsed outwards, possibly the result of the 1941 bomb blast that left the building uninhabitable. 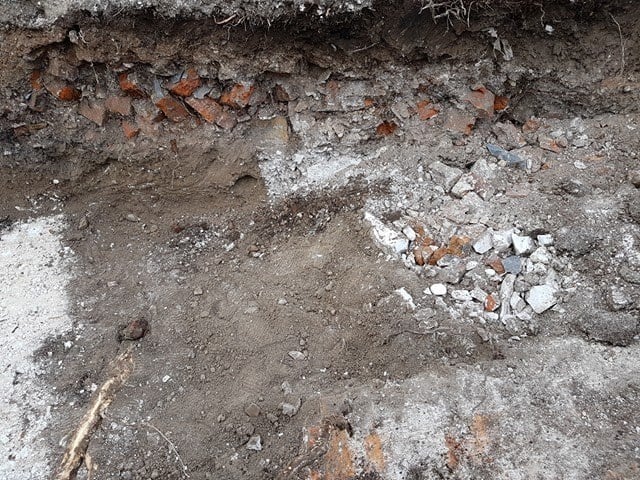 A mangled tin bowl, a ‘J Tyrrel- Margate’ milk bottle, and other 20th century ephemera are possible reminders of the house’s occupants. Stone flagstones and other architectural features found today will be kept on the site, and hopefully incorporated into the new visitor centre and village hall.

The most unexpected find so far might be more of a challenge for Kaner Olette Architects, though. Just behind where the new building will sit is a five metre deep drainage hole, carved into the solid chalk!