The Great Fire of London became a raging inferno and engulfed buildings in moments – right in front of children from Newington Community Primary School in Ramsgate.

The historic scene was recreated by Year 1 pupils as part of their history and literacy learning. They made Tudor style homes out of paper and card and decorated them to create a typical street scene of homes, businesses and warehouses from London of 1666.

To simulate the great fire, the houses were laid out on the playing field and set alight. As the flames spread the pupils sang the historic rhyme London’s Burning.

The flames and smoke billowed above the rooftops as the children watched just how quickly the fire spread through the closely-packed miniature homes.

Year 1 teacher Tim Knight said: “This is a great way of getting the children involved – they could feel the heat from the fire, smell the smoke, hear the crackling flames and see how swiftly the buildings they had made were engulfed in the inferno.”

Head Teacher Cliff Stokes added: “This is a fantastic way of taking teaching out of the classroom and creating an event to really underpin what our children are learning.” 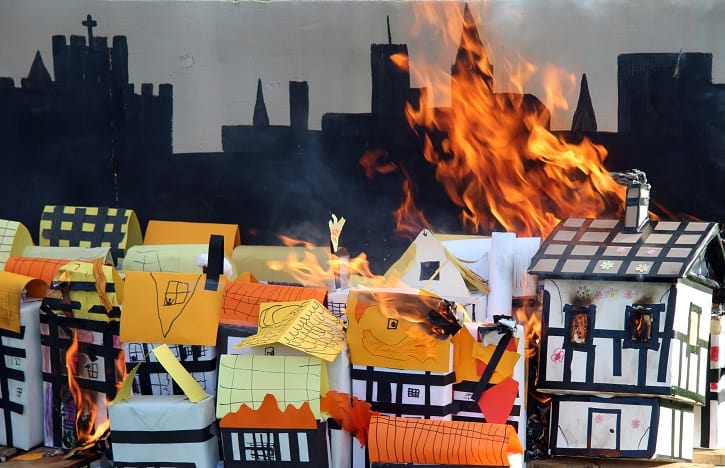 The pupils, who are being time travellers to historic world events for their learning programme this term, are also writing their eye witness accounts of the great fire in the manner of diarist Samuel Pepys, whose work they are also studying.

The fire began on 2 September and lasted just under five days. One-third of London was destroyed and about 100,000 people were made homeless. The fire had a devastating effect on the lives of Londoners from all parts of society. It took about 50 years to rebuild the ruined city