There were four changes to the Thanet starting XV that defeated Park House in the last league match with Arek Arkadiusz an able deputy for the injured Kieran Wright in the second row and Kris Finneran returned in the back row after a  coaching contract in Scotland. Callum Doody was at scrum half and Tom Longdon was on the right wing.

Wanderers kicked off and quickly regained possession before laying siege to the home line. Captain Brett Scott went close before, with five minutes played, centre Stuart Plumridge burst through to open the scoring. Sam Rolfe stroked over the tricky conversion to put Thanet 7-0 up. Rolfe now showed some footballing skills to set up an attacking position before Finneran picked up and broke through defenders only to be hauled down just short of the line.

A scrum within Folkestone’s 22 resulted in quick ball to centre Jay Morbey and not even an accidental high tackle could prevent the powerful centre’s advance to the try line. No conversion but Wanderers were 12-0 ahead after ten minutes.  The home side now mounted a series of attacks that tested Thanet but a strong rearguard  action held firm until Rolfe’s long clearance took the action back to the halfway line. Peter Macaulay made a good interception and threaded a testing grubber through for Doody and Longdon to chase and it was the latter who was the scorer. Rolfe’s excellent conversion made it 19-0.

On  thirty minutes the bonus point was secured and this time it was the alert Doody whose pick and go allowed him  to slip through wide right to make it 24-0. A penalty attempt for Folkestone went wide and the score was unchanged at half time.

An early penalty to Folkestone in the second half gave them a good attacking platform and forward pressure led to a try which was well converted. Danny Clement made many metres after catching the restart and running it back and offloading at pace. Wanderers’ attacks were breaking down near to the line with impatience a factor. Another trademark big tackle from Thanet’s scrum half Doody again drove a much bigger opposition forward backwards. 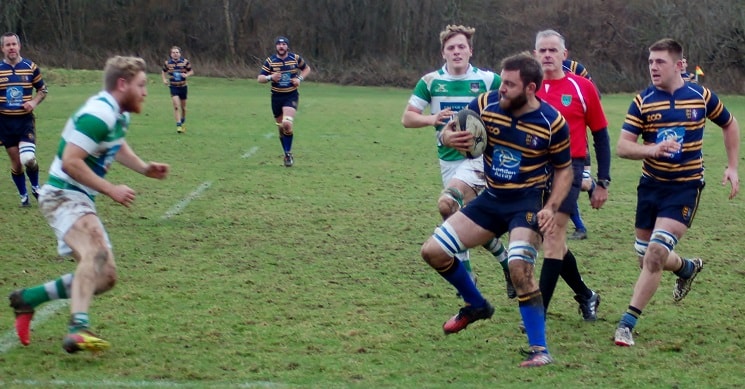 Isaac Roe, who had replaced Longdon, was back after a few weeks out following a head injury assessment. He was now at the end of a flowing movement receiving from Adam Gaddes who had carved through the home defence. The young winger still had work to do before finishing off a well crafted try. Ten minutes later from a line-out following a penalty the ball was recycled patiently infield and Andy Letts was close to scoring before Scott capped another fine performance with Thanet’s sixth try which Rolfe converted. At the other end Folkestone secured a penalty try as their pack enjoyed a period of dominance to make it 38-14.

For Thanet Roe looked to have finished off another fine handling move between backs and forwards before being called back for a forward pass. Apart from Roe, the other two subs, Nick Herbert and Jay Sanford, both saw plenty of action from the bench as Head Coach Tom Carlier regularly rotated his players in the testing conditions. Charlie Knight had looked dangerous on the few occasions he had received the ball on the left wing but now had to withdraw with cramp shortly before the final whistle sounded. 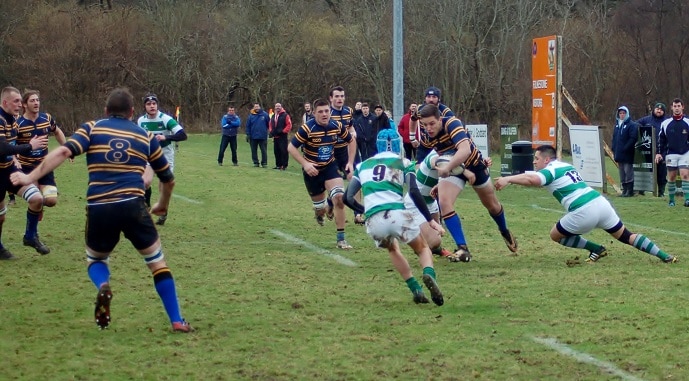 Carlier was very satisfied with the result but reminded all that training should not be an optional extra in the testing run in to the end of the season. In what was essentially a good team performance Warren Riddell-Broomfield was a mobile and effective hooker and his tight head support Joe Carlier also put in a quality shift in the lighter pack. After consideration Carlier named Callum Doody as man of the match for an all round good performance and for lighting up a less than memorable match with his massive tackle.

Next Saturday, February 3 Old Williamsonians are the visitors, the Rochester based side inflicted Wanderers’ first defeat this season with a last gasp try to win the away fixture by 15-13. All support is welcome as Wanderers aim to reverse that result.