Two friends who were ‘trolly dollies’ with Air Ferry airlines at Manston Airport in 1963 are writing a book of their memories – but are appealing for help.

Yoland Brown and Angie Castle shared a flat in Birchington during the Summer of ’63 while working for the independent airline.

The pair are putting together some favourite memories but there is one mystery they have not been able to find the answer to.

Angie, who now lives in Somerset with husband Jerry, a former Manston customs officer, said: “Yoland is writing this book about our time as stewardesses with Air Ferry during its first year of operation at Manston Airport, and we have been trying to remember all the funny things that happened.

“I know that The Beatles came through the airport and we both missed them because we were working, but we also remember that the papers were full of the Christine Keeler and Profumo affair and that the lady took refuge somewhere in the Isle of Thanet while Steven Ward’s trial was going on.

“We would like to find out more about that.”

The English model and topless showgirl had met osteopath Stephen Ward at a dance club and soon found herself in fashionable circles. At the height of the Cold War, she had an affair with married government minister, John Profumo, as well as a Soviet diplomat.

A shooting incident between two of her other lovers caused the press to investigate her, revealing that her affairs could be threatening national security. In the House of Commons, Profumo denied any improper conduct but later admitted that he had lied. This incident discredited the Conservative government of Harold Macmillan in 1963 in what became known as the Profumo affair.

Ms Keeler was never charged with being a prostitute, but Ward was found guilty at trial of being her pimp. She was however jailed for nine months on perjury charges following a separate incident.

Yoland and Angie are trying to discover if rumours of Ms Keeler hiding out in Thanet were true for inclusion in the book.

In that year Air Ferry was operated from Manston by Leroy Tours, until 1964 and then it was owned by Air Holdings until the airlines closure at the site in 1968.

Summer 1968 was Air Ferry’s last season of operations and the airline ceased trading on 31 October 1968.

In the book Yoland says: “I went to RAF Manston in Kent for an interview with Air Ferry Ltd, run by husband and wife, Hugh and Audrey Kennard.  One of the many tiny independent `airlines` started in the 50s and 60s, manned by ex RAF chaps who just loved flying, and a few ex WW2 aeroplanes – remember Freddy Laker?   Well, he was one of the successful ones. I got the job – although the management and cabin crew trainers must have wondered for the next 6 months why they gave it to me.

“I joined two other girls in a flat above a cafe in Birchington on Sea with  Liz, a girl with experience as cabin crew, having flown with several other start up airline businesses and Angie who had been a nanny to film star Kenneth Moore`s children, so neither of us were exactly trained for a life in hospitality.

“There were about 9 of us new cabin crew girls (of course, only girls)  and we were to be trained by two old hands at the job, they, like Liz had both worked for some very dodgy sounding flying operations – companies who ran out of cash to pay airfield dues, when the air hostesses had to unload the baggage! 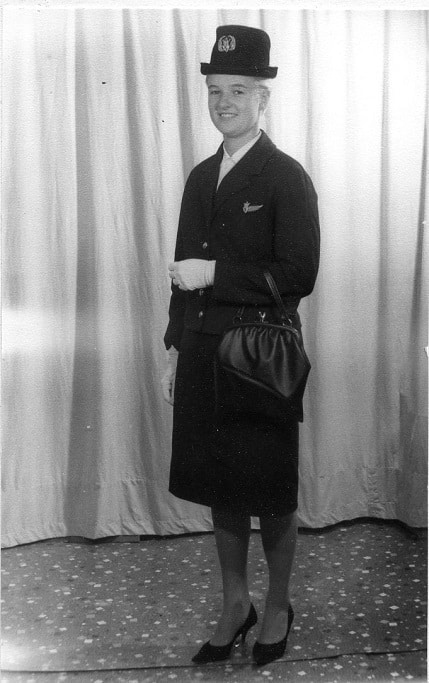 “I failed at most parts of the training and when using the escape slide, only I could get stuck at the top of the slide, with my jumper caught on some protruding bit of aeroplane.   As it was April, I guess they did not have time to readvertise for new staff.

“Towards the end of our training we had the opportunity to go on a flight and see what we were supposed to do.  Oh god, how could I not have checked my passport was in date!   I had to catch a train up to the passport office and wait until they had it ready for me to take it back to Kent.

“Air Ferry had 4 aeroplanes, two Vikings, based on the Wellington bomber, and  commissioned by BOAC in 1946, sold to BEA and then sold off to independent airlines in the early 1960s.  The `big` aeroplanes were Douglas DC4s, veterans of the 1948 Berlin

“It was during that summer of 1963 that The Beatles `arrived` and the Profumo affair blew up. I think some Beatles music might have been played at parties, but I was not impressed – it wasn`t Trad Jazz. And to this day, the Un-Fab Four`s warblings do nothing for me.

“The Profumo affair was a bit more exciting, scandal always is, and Christine Keeler ran away to hide from the press on the Isle of Thanet – somewhere on our doorstep!”

Yoland married her boyfriend of that year, Roger, and they now run a bed and breakfast in Shropshire.

Angie and Jerry had been together in ’63 but returned to London and both married other people in 1966. However, after meeting again in 1982, they married three years later and, after both retiring from BAA at Heathrow, moved to Somerset.

If you can help the friends with the missing part of their Keeler puzzle email isleofthanetnews@gmail.com or comment below and we will pass the details on.