The former Laleham Gap school plot in Broadstairs is being offered to the former owner or their successor in title as it was previously compulsory purchased.

The site in South Cliff Parade is no longer used by the school following relocation to Ozengell Place, Ramsgate, by the Royal Harbour Academy.

Former owners or successors have until February 14 to register an interest in buying the plot at the market value. If no interest is received the land will go on the open market.

KCC has also put the remainder of the former Newington infant school site in Melbourne Avenue on the market. Copperfields extra care housing opened on part of the site in 2016.

The 3.76 acre plot is described as an ‘opportunity’ for around 60 homes. The site does not include  the existing woodland fronting Melbourne Avenue. 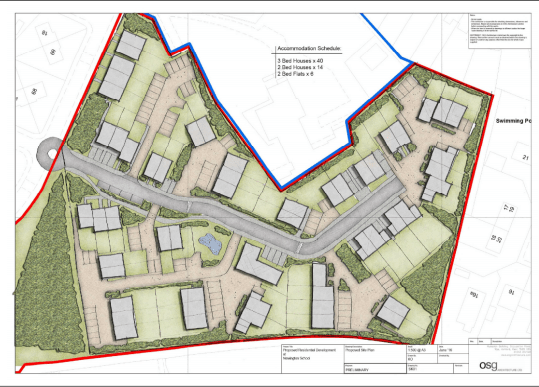 The buyer will be responsible for completing the demolition of any remaining buildings and for all necessary works to prepare the site for redevelopment.

Representations have been made to Thanet District Council for the inclusion of the site for residential development in the Draft Thanet Local Plan.

A preliminary indicative scheme for the property has been prepared for information purposes only, which is available to interested parties. This illustrates a potential for 60 units, providing 40 x 3 bed houses, 14 x 2 bed houses and 6 x 2 bed flats.

A sale brochure from Harrisons chartered surveyors says: “Expressions of interest are invited from interested parties for a purchase of the freehold of the site.

“Such Expressions of Interest are to indicate the basis of that interest and the nature of the intended development. All options will be considered, ranging from an early outright sale to a subject to planning disposal.

“From the interest received, interested parties will be invited to submit formal offers for the site.”