A cheque for £1,500 was presented to the Broadstairs Town Shed, at their Christmas open day on  December 13.

The presentation follows a successful film night put on by BroadstairsLit and supported by award-winning actors Johnny Harris and Michael Smiley.

The fundraiser took place on October 29, when locals and visitors packed The Palace Cinema in Broadstairs to see the highly acclaimed Brit Film Jawbone, starring Johnny Harris, Ray Winstone, Michael Smiley and Ian McShane. The film was followed by a reception at The Pavilion where the star and writer of the film Johnny Harris, and co-star Michael Smiley took part in an interview and Q&A.

Denise Martin-Harker, from the BroadstairsLit team, said: “The film is about a man’s struggle with loneliness and isolation; a theme that fits well with the ethos behind The Town Shed – a place where older people can learn new skills, work on projects for the community or just share a cuppa.

“Dean Martin, owner of the great new Menswear shop ‘House of Martin’ in Broadstairs, connected us with Johnny Harris and when we asked him to come he didn’t hesitate – we’re so grateful to Dean, Johnny and Michael.” 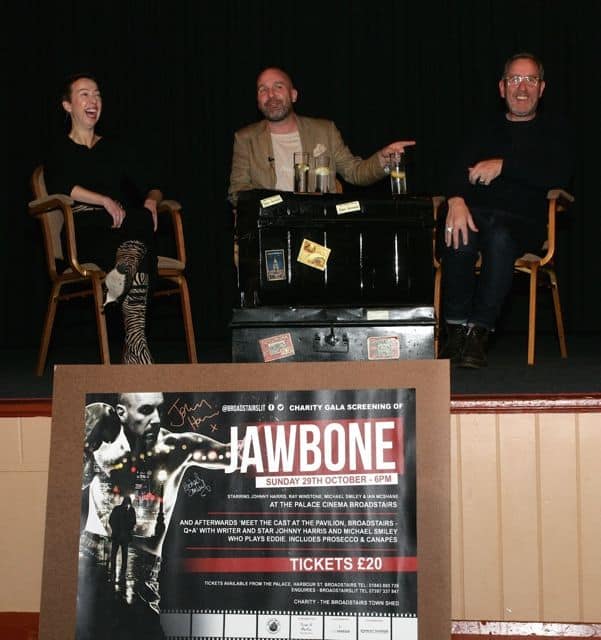 Johnny described the thinking behind the film: “Jimmy McCabe returns to his childhood boxing club, the only family he has left, and through that finds the strength to stand tall again. The film is about hope and how important community and family in the broadest sense is, it truly can save lives.”

For those who missed it the film is now available to watch on Amazon Prime and Netflix.

If you would like to know more about The Town Shed, how to join or how to support  the charity go to broadstairstownshed.org.uk

BroadstairsLit runs events with authors and celebrities all year round. The 2018 calendar begins with local Great British Bake Off Star Chetna Makan on January 25 at The Yarrow, and the event includes an Indian meal cooked by Chetna.
Full details on BroadstairsLit.co.uk