Crowds turned out yesterday (December 8) for the Christmas light switch on in Cecil Square.

The honours were done by Garlinge schoolgirl Mia Kirkden and Danny Wisker with other members of Luke’s Legacy, the Luke Williams Trust –  in memory of the former Hartsdown teacher.

A fundraiser was launched last month after it was revealed there would be no Christmas tree in the square this year.

The town’s tree, which is funded by the Margate mayor and charter trustees, was placed in the Old Town instead.

But local firms Falcon Electrical and Security Ltd, Off The Hook Productions and CommunityAd Web Ltd  stepped in to raise the money – through generous community donations – to bring Christmas to Cecil Square.

The crowdfunder page, created by Rachel Hamlin, Louis and Kelly Stacey, smashed through its  £1,200 target, paying for the tree, from Westgate Pet and Garden Centre, lights and decorations and  planning permission.

The switch on event included performances from Silver Slipper, Decade Diva, Off The Hook Productions, singer Red, Santa and a (slightly delayed) lighting up of the tree. 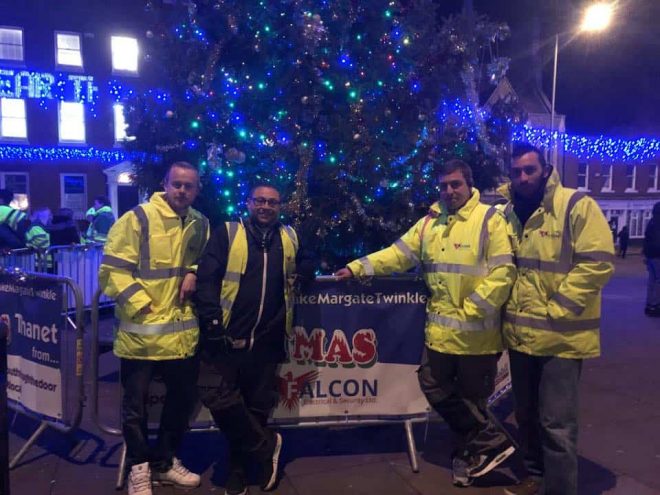 Louis Mayhew, of Falcon Electricals, was also instrumental in bringing a Christmas tree to Cecil Square last year after the the display’s lonely set of lights were branded appalling by outraged residents.

Falcon Electrical and Security Ltd, Off The Hook Productions,  DAM High Access, Goodwins Power Tools Margate, and CommunityAd Web Ltd,  and residents including Mia Kirkden, got together to decorate and light the tree properly.

Louis said of this year’s spectacular tree: “We promised Margate we would make it twinkle and it is the only twinkling tree in Thanet with 4000 lights!”