A fundraiser has been launched after it was revealed Margate’s Cecil Square will not get a Christmas tree this year.

The town’s tree, which is funded by the Margate mayor and charter trustees, will instead be placed in the Old Town.

The decision means Cecil Square will be bare. The blow follows last year’s “shambolic” tree that was put in place with just one string of lights.

#Margate council, you should be ashamed yourself!!

Who ever is responsible for the worst Christmas tree decorations I've ever seen! pic.twitter.com/84S36aG5Li

The display was so appalling that local companies, including Falcon Electrical and Security Ltd, Off The Hook Productions,  DAM High Access, Goodwins Power Tools Margate, and CommunityAd Web Ltd  and residents including schoolgirl Mia Kirkden got together to decorate and light the tree properly.

Falcon co-director Louis Mayhew organised a switch on event, with Mia (both pictured below) doing the honours, which was attended by crowds of people. 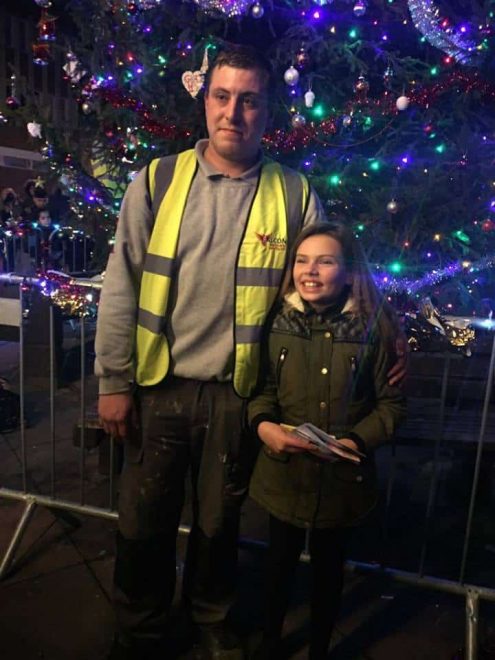 Now Mr Mayhew has stepped in again, vowing that Margate will get a tree in Cecil Square.

The 24 year old said: “Over my dead body will Margate not have a fully lit decorative tree.

“Whether I have to pay for it or not, it’s a tradition I started last year and Fakcon will not disappoint. A donations page to get a tree is set up and the lights will be supplied and fitted by us.”

The fundraising page, created by Rachel Hamlin, Louis and Kelly Stacey, aims to hit a £1,200 target.

On the page Rachel says: “We need £2000 to get the tree and erect it and put lights on. Cecil Square has never not had a tree. Even if it’s only a small amount please donate so we can keep the tradition going.”