Dent-De-Lion gatehouse in Garlinge is the only remaining structure of a medieval fortified house.

The building, sometimes referred to as Thanet’s only castle, is scheduled under the Ancient Monuments and Archaeological Areas Act 1979, the listing being put in place in 1951.

Fortified houses belonged to some of the richest and most powerful members of society, primarily between the 15th and 16th centuries.

With fewer than 200 identified examples across the country, all examples exhibiting significant surviving archaeological remains are considered of national importance. 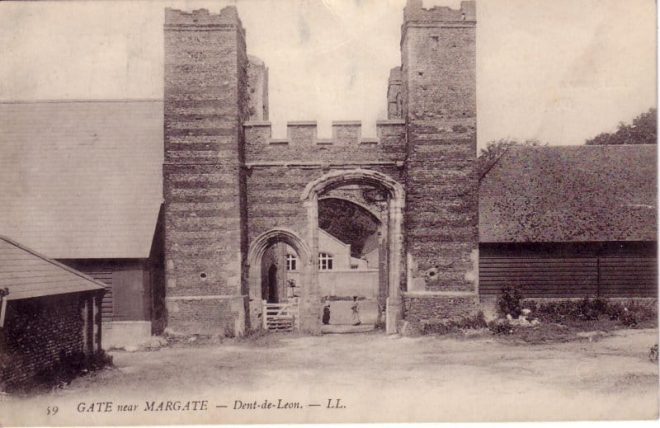 The Grade II* Listed Dent-De-Lion gatehouse has been dated to the early 15th century and survives in almost complete form, with some subsequent restoration and repair.

It is a tall rectangular building with knapped flint and red and yellow brick, decorated with ashlar dressings.

The main approach to the gatehouse was from the south, and the southern facade is pierced by a tall carriage entrance, headed by a segmental arch. This is flanked to the west by a smaller, pointed archway for pedestrians.

The entrance way is topped with a crenellated parapet. To the rear is a single, large, round-headed archway with flint dressings. Flanking the cobble-faced entrance passage are four tall, square, embattled corner towers pierced by gunloops and arrow slits.

Each tower contains a newel staircase giving access to the roof. Further architectural decorations include a stone string course over the entrance archways and a carved stone shield over the carriage arch, representing the coat of arms of the Daundelyon family, for whom the gatehouse was built.

The gatehouse was originally the main entrance into the courtyard of a contemporary fortified house. The house, now demolished, was in an area now occupied by housing.

The builder of the fortification was John Dent De Lion (Daundelyon). He fortified his manor because of the threat of a Flemish invasion after 1435, which encouraged a new wave of fortifications on the south east coast.

It is recorded that the site was later used for more disreputable purposes as a base for Dent De Lion’s smuggling activities. In the 18th century the estate and castle was sold to Henry Fox, Lord Holland, and passed to his son Charles Fox.