Margate firefighters have rescued a kitten stuck on the roof of a house.

The black kitty was first heard on the roof of a home in Byron Avenue in Margate at 9am today (October 27). It is also thought to have also been in the chimney.

A KFRS spokesman said: “It was reported to us by the resident in the house who had become concerned that the kitten might fall back in the chimney.

“The Margate crew pitched a 7m ladder to get to the guttering and a roof ladder to access the chimney. They grabbed hold of the kitten/cat by the scruff of the neck and it was brought to safety. A neighbour had a cat box. It appeared unharmed although it was meowing and squirming a lot.”

There is now a search for the owner.

The kitten has been scanned but is not chipped. It is female, all black and wearing a glittery collar. 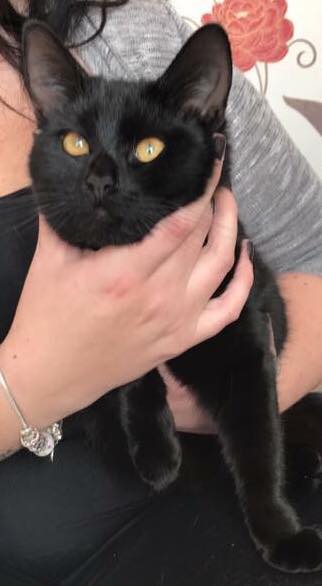 Members of the Missing Cats and Strays in Thanet facebook group are hoping to track down the kitten’s owners.

Anyone with information can find the group facebook page here

UPDATE: The kitten has now been reunited with her owners