Ramsgate Music Hall turns into a sweatbox pretty quickly. With a capacity of 160 people, it’s so intimate that you can touch and, yep, even smell the band. Luckily, I’ve smelled much worse than The Big Moon. Despite being nominated this year for the prestigious Mercury Award, the band are still content living the indie lifestyle, as I would find out after the show…

Opening their set with Silent Movie Susie, the chorus line of “come back for the summer” brings the first of many short, sharp singalongs of the evening. There’s hooks all over the tracks from their debut album Love in the 4th Dimension, whether it’s in the lead vocals, backing vocals, or coming from Soph Nathan’s piercing lead guitar.

They happily mock each other’s onstage chat and don’t seem to take themselves too seriously. In fact, backstage before a gig, their social media shows them crowding around a laptop to watch The Great British Bake-Off.

In-between delivering impassioned sneers down her microphone, vocalist Juliette Jackson is either staring out individuals in the crowd, or jumping around in there herself to deliver the rousing ‘Bonfire’.

This wasn’t the only time the crowd were involved. In a venue this small, any gaps between songs mean the band can hear every word from the crowd. One such moment leads Jackson to ask the crowd to all shout out their favourite item from Greggs at the same time; “I’m glad we could all get that out of our systems”.

Unsurprisingly, singles Cupid and Pull the Other One get the loudest cheers of the evening, which consistently see bassist Celia Archer beaming. A mix of the quiet/loud/quiet formula, perfected by Nirvana, and the odd unexpected chord change, so well utilized by Pixies (whom they are undoubtedly inspired by), give more than just a tip of the hat to the early 90s; but these unique songs pack an infectious punch in 2017.

Having finished their set with a blistering run-through of their first single Sucker, there would be no encore… It’s a clear choice of quality over quantity from a band gleefully enjoying the early stages of their career. 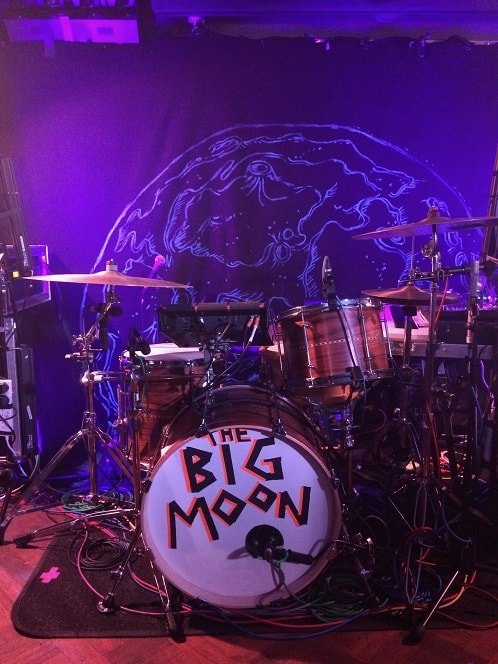 After show, The Big Moon sell their own merchandise and chat with fans. It’s not only the merch-selling which has a DIY approach… “We take it in turns to drive. I drove down here so that I could drink tonight… smart, right?” says drummer (and sometimes simultaneous synth player) Fern Ford. After a conversation about our hometowns (“You know Stephen Mulhern? His dad owns a joke shop in Minehead!”), I realise I haven’t paid for my record – “oh, haven’t you?”, she asks, “I’m not very good at my job”.

They also passionately champion indie-fuzz Kentish support act Get Inuit’s merch on their own torsos. Similarly early in their career, it seems the two acts have identified with each other both musically and in a shared knowledge of “sh*t vans” on this tour.

It’s no surprise that as their tour comes to a close, the latter dates have all sold out.