A planned rally in Ramsgate by Britain First has been cancelled.

The far-right group intended to gather at Ramsgate train station on October 14, in protest at the arrests of leaders Paul Golden and Jayda Fransen  for inciting racial hatred.

But Ms Fransen and Mr Golden are currently in the Netherlands and say they will be arrested as soon as they step on UK soil, meaning the rally cannot go ahead.

The charges relate to the distribution of leaflets in Thanet and Canterbury, and the posting of online videos during the trial of three men and a teenager later convicted of raping a 16-year-old girl above the 555 takeaway in Ramsgate.

In May 555 owner Tamim Rahmani, Shershah Muslimyar, 20, formerly of Hovenden Close, Canterbury; Rafiullah Hamidy, 24, formerly of High Street, Herne Bay; and  a teenager were found guilty of raping the 16-year-old  in a room above the food outlet in the early hours of Sunday 18 September 2016.

The three men were sentenced to 14 years and the teenager to seven years at Canterbury Crown Court last month.

Ms Fransing and Mr Golding, both from Penge, south-east London, were originally arrested on Wednesday 10 May. Ms Fransen is charged with four counts of causing religiously aggravated harassment, and Mr Golding three counts.

Both have been bailed to appear before Medway magistrates on 17 October.

Kent Anti-Racism Network had been organising a counter protest. The groups says members will now hold a victory march from the station to the town centre at noon. 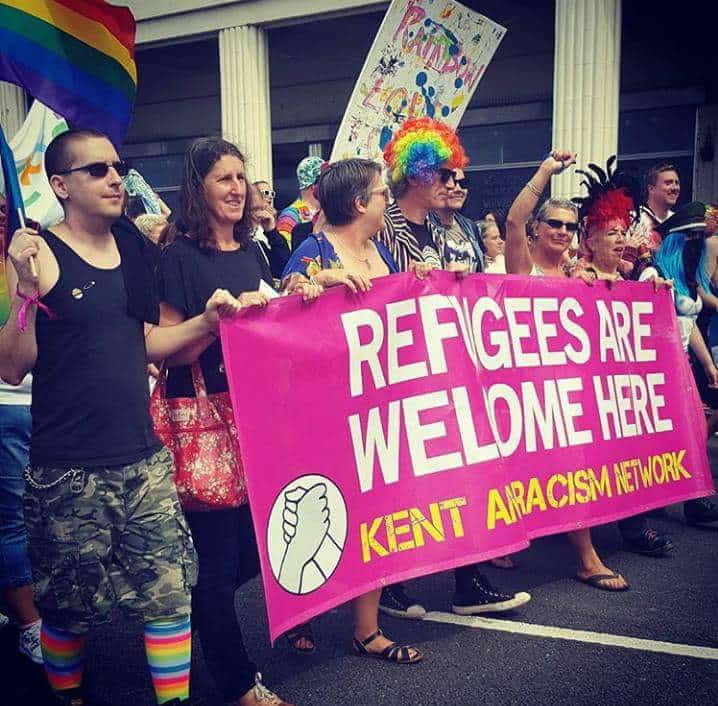 A spokesman said: “We understand that the Britain First group has cancelled their event in Ramsgate next Saturday. This is great news for Ramsgate and all those that stood together against their racism and hatred should be proud.

“They wanted to come and exploit the pain of young victims of rape and assault. They could see they are not welcome here, there has been wide condemnation of their views and organisation

“The Karnival Against Fascism organised by Kent Anti Racism Network is of course going ahead. It will be a celebration of both the unity and diversity of Thanet and east Kent. There will be a choir; live music; costumes and even a Kazoo Band.”

Councillor Karen Constantine added: “I’m delighted that the people of Ramsgate won’t have to suffer a Britain First March. I’m also gratified to note that their support base is obviously waning.

“Britain First were not welcome, and will never be welcome in Ramsgate. There is no place in our town for their pernicious politics of hate and division.”