The bay has been rated as poor under EU water quality regulations for several years. Last year, under stricter EU regulations which came into force in 2015, Walpole Bay received the poor rating despite having 17 ‘acceptable’ water quality results out of 20 weekly samples,

Under the EU guidelines, any beach classified as ‘Poor’ must display an ‘advice against bathing’ symbol at the beach. The advisory symbol does not restrict people from swimming in the location but  provides beach users with a more informed choice before they swim.

The ratings are based on historic data, covering the previous four years. Thanet District Council implemented a sticker system last year to give people up-to-date information on weekly water tests.

The Environment Agency weekly bathing water test results are posted on a sign at each of the isle’s bays and beaches. A green sticker indicates an acceptable water quality reading and a red one shows failures.

Walpole Bay tidal pool has received green stickers every week this year. The Bay ratings on the Environment Agency website also show gradings of 10 for escherichia coli and intestinal enterococci, which is the best rating.

The good results follow work by Thanet council and Southern Water to gain a better understanding of what can impact water quality across the beaches.

The findings revealed causes of pollution are often man-made factors like littering, not picking up after dogs and feeding seagulls. 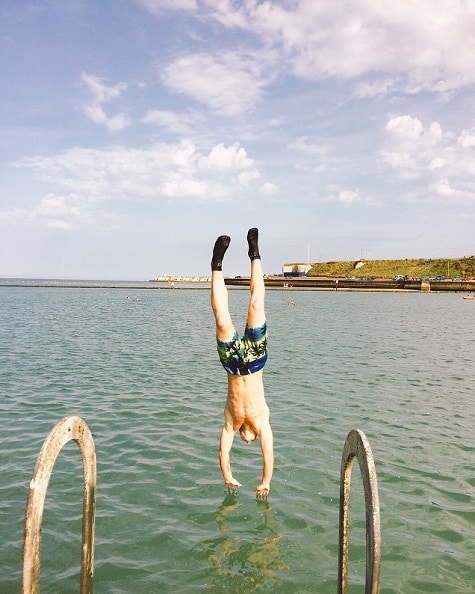 Walpole Bay Swimmers say this year’s results could help with the aim of eventually getting a Blue Flag at the site.

A spokesman said concerted efforts to keep the area clean may be a factor in the improved samples.

They said: “It’s great news and we are really hopeful for Walpole Bay to get a Blue Flag one day. Some of the good results could be down to swimmers constantly lobbying the council to ask for assistance with cleaning the beach and top prom to stop litter drifting onto the beach and to enforce the dog ban from May 1-September 30.

“Perseverance with organising regular proactive action in the form of litter picks and beach cleans with the swimmers group, Haeckels, ABC Margate WI , Thanet Coastal Projects, working on beach cleans together twice per month all helps.

“We’re working really hard as a community to try and achieve a Blue Flag and cleaner waters at Walpole Bay as it’s Cliftonville’s very own beach. But we can only get a seaside award with infrastructure such as life guards and certain facilities, which are things beyond our control. It’s great that Walpole Bay is now achieving really high water quality standards. Everyone’s support and hard work is beginning to pay off.”

Cllr Lin Fairbrass, Deputy Leader and Cabinet Member for Environmental Services at TDC, said: “The water quality results at Walpole Bay are encouraging and we’re pleased to see that the collaborative working between local community groups, such as the Walpole Bay Swimmers, and the council and its partners has had a positive effect on this summer’s readings.

“The council continues to work with Southern Water and the Environment Agency to raise awareness of the things that impact water quality at Thanet’s beaches, including encouraging regular beach cleans via dedicated #2minutebeachcleans; working alongside Kent County Council to clear out drains and gulleys which could take dirty water to the sea; and removing seaweed when we are permitted to do so.”

Annual gradings for water test results are published in November.