A bid made last year to gain government funding to double lorry capacity at the Port of Ramsgate may still be on the table – and would include ‘reclamation’ of 10 hectares of extra land.

In November 2016 it was revealed that Thanet council had failed in a bid to get Government funding of £4.17million, to be matched with £2million from the authority, to carry out plans which could double lorry capacity at the port to one million vehicles a year.

The bid was not approved but the plans have now appeared in a new document being discussed by all of east Kent’s councils.

The East Kent Growth Framework document lays out ambitions for economic growth over the period 2017 to 2027.

It has been compiled by the East Kent Regeneration Board (EKRB), made up of Ashford, Canterbury, Dover, Thanet and Shepway councils, along with Kent County Council (KCC).

The plan was originally created in 2013 but has now been updated, with publication in August, and includes projections for 37,400 jobs and 84,600 dwellings across east Kent– a significant increase from the earlier report.

For Ramsgate Port the updated plan notes that £2 million has been invested in the refurbishment of Ro-Ro berths two and three, perimeter security improvements and maintenance dredging.

It adds: “The Port currently has capacity for 500,000 units per annum which could be doubled and provides significant value to transport and logistics in East Kent. The project is currently at detailed design stage with the council leading on delivery of the first phase. The first phase is the construction of a new double-deck roro (roll on roll off) berth which will provide additional capacity for modern double deck loading and unloading which will increase resilience at the Port.

“This initial phase will also include capital dredging of the one nautical mile long approach channel to the port entrance. This will widen the channel to provide the necessary clearance for larger vessels (up to 200m in length) to be accommodated at the port.”

Much of this work has taken place, meaning the council could now be moving into the proposed second phase (originally phase 3 in last year’s bid) which includes expanding the port through land reclamation.

The report states: “The second phase of the project involves seaward port expansion via land reclamation. The scheme will deliver at least 10 hectares of additional port side space and a long (250m) alongside quay facility allowing up to 2 freight vessels access at any one time.”

Dover District Council approved the plan last month. Thanet council’s Cabinet and Corporate Management Team will be reviewing the draft document next Monday and then it goes back to the East Kent Regeneration Board for final sign-off.

Canterbury, Shepway and Ashford councils are also due to discuss it. 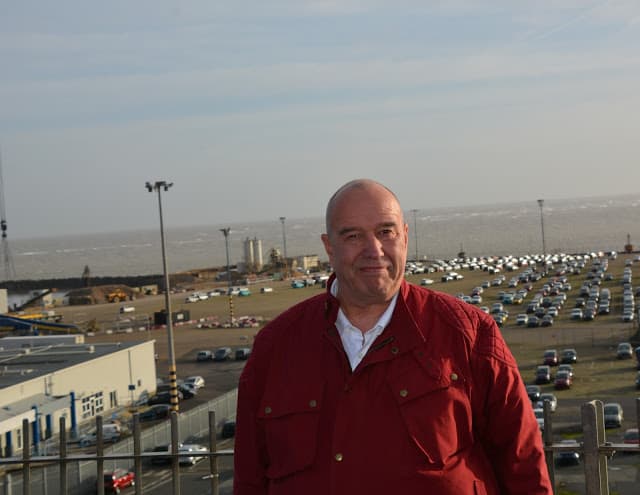 Former councillor Ian Driver (pictured) initially publicised the report and said it is a move towards industrialisation at the Port. He said: “A leisure focused development at Ramsgate Port will enhance and strengthen Thanet’s large and rapidly growing visitor economy which, in 2015, was estimated by independent researches to have generated £293million a year and supported over 7,000 jobs.

“Imagine how much more money could be generated by the transformation of the Port of Ramsgate into a modern 21st century marina and leisure quarter. Imagine how many more desperately needed jobs, training and business opportunities could be created as well. In my opinion, a leisure focused port area would create much more money and many times more jobs than an industrialised port ever could.”

The plans are a reflection of proposals published by Thanet council last November. In the Thanet Economic Growth Strategy the authority also says it will aim to get “public and private sector investment in the development of a new on-port alongside quay, and most importantly, an off-site freight logistics hub at Manston Business Park.”

The TDC document says a business plan would be developed and that other areas that need to be explored include: “the potential for servicing major component replacements over the next few years, supply chain provision, new offshore development and wider development of the “green tech” sector.

“Servicing facilities for vessels using the Port more generally also need to be improved. All of these aspects will help widen the offer that the Port provides.”

An application has also been submitted for a ‘temporary’ two-year truck and coach park at the Port.

The planning application has been made by Thanet council’s harbour master Rob Brown for the fenced in area, previously used to  park HGV’s which were either waiting to be shipped from or had arrived into Ramsgate by ferry, as a 90-space truck park.

In planning documents submitted for the proposal it states: “The maximum anticipated number of HGV movements to and from the Port as a result of the proposed truck park is 100 vehicles per day.

“The proposal will encourage legal overnight off street parking of HGV’s and has potential to help reduce HGV parking on carriageways in the district and county which can cause a hazard to other road users.”

The council says planning permission is required because the lorry park proposal is not specifically port related.

A spokesman said: “The proposal will offer off-street parking opportunity for HGV’s in the Thanet and East Kent Area.  Overnight parking on roads and in lay-bys can create local hazards.  This proposal will test the market in terms of parking need whilst addressing the HGV parking issue locally as well as presenting a revenue income opportunity.

“There will be a charge per 24 hour period per HGV but the exact price point has not yet been set. “

A Kent County Council survey of overnight HGV parking in Kent for June 2016 recorded 5 HGVs parked overnight in Thanet compared to 140 in Swale. In September 2016 the figure for Thanet was 10 with 117 in Swale.