The Fort Road Hotel in Margate has been in a state of neglect for some two decades – but proposals were previously put forward to create everything from a hotel to a theatre and gallery.

The early 19th century property, once the Fort Castle pub, is one of the last surviving buildings in the area that celebrated artist JMW Turner would recognise. Turner spent 15 years ‘weekending’ in Margate with Sophia Booth (whose house was opposite) and, as a noted drinker, it seems  likely he visited the establishment. 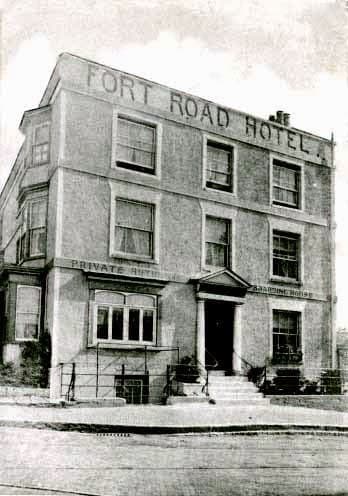 The hotel, which appears on Margate maps dating back to 1821, could now be put up for sale by owners Thanet District Council.

It was compulsorily purchased by the authority in May 2010. Initial plans for the site were for a boutique hotel with the aim of promoting its links with JMW Turner and the then-new Turner Contemporary gallery.

TDC installed a neon advertisement on the roof, at the cost of £5,000, proclaiming ‘Iconic Site’ as part of the bid the market it as: “a small, twenty-first century character hotel with up to 12 rooms and a restaurant; which would help address the shortfall of quality hotel accommodation in Margate.” 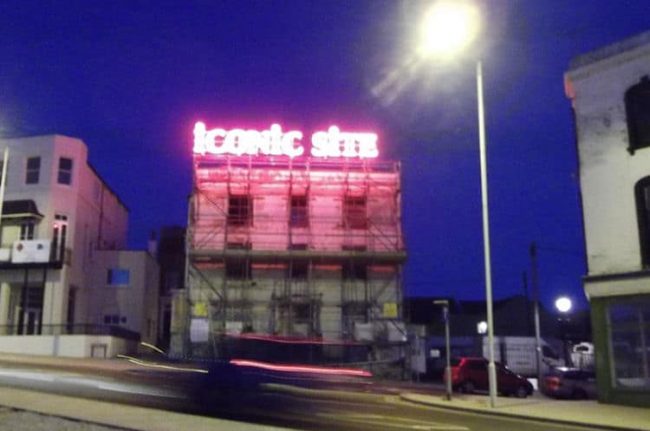 Proposals for the site were drawn up by Guy Hollaway architects on behalf of two interested parties, including  Beach Blanket Babylon which already had prestigious restaurants in Notting Hill and Shoreditch.

Turner Contemporary had proposals drawn up by Hawkins/Brown. An enquiry was  also made by  the Pollock’s Toy Museum Trust. The idea was for it to house its collection at the property and open it as an attraction. Talks were also held between TDC and the Spitalfields Trust, a charity which rescues derelict historic buildings and sells them on for beneficial use.

But in 2015 it was decided that the building should be converted into social housing flats, with the council saying no suitable plans had been put forward.

Now, following the agreement of compensation and costs  in July this year, TDC Cabinet members will discuss putting the property on its asset disposal list.

But what could have been the fate for the Fort Hill Hotel? We take a look at two of the ambitious plans proposed for the site: 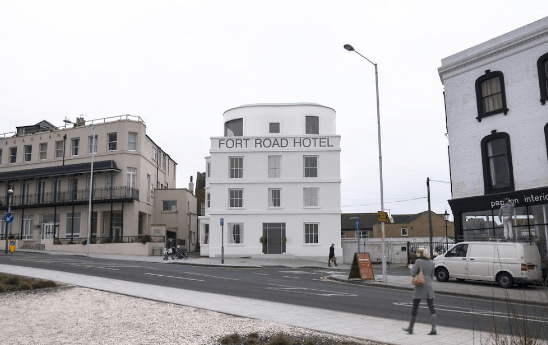 In May 2013 Guy Hollaway unveiled the design commissioned by Beach Blanket Babylon.

The plan was to restore the existing building’s historically significant façades. A contemporary addition, set back from the existing façades, would replace the existing roof and form a bar and roof terrace. Frosted glass would have been used on this part of the property.

The ground floor would have retained the original hotel entrance facing Fort Hill and accommodated a restaurant, with display kitchen, and hotel reception..

On the first and second floors, a total of nine boutique hotel rooms with en-suite facilities were planned, each overlooking Turner Contemporary, the sea and the setting sun.

Hawkins Brown put together a document containing several proposals for Fort Hill. Plans centred around either removing the middle, interior partition wall or retaining it and gutting either both sides of the partition or just one.

Ideas included adding another level to create a rooftop terrace, garden or mini-pavilion and changing the floor levels to make he most of the internal space. Suggested uses were  the boutique hotel, basement theatre and offices or mixed use.

Four options put forward in the document are 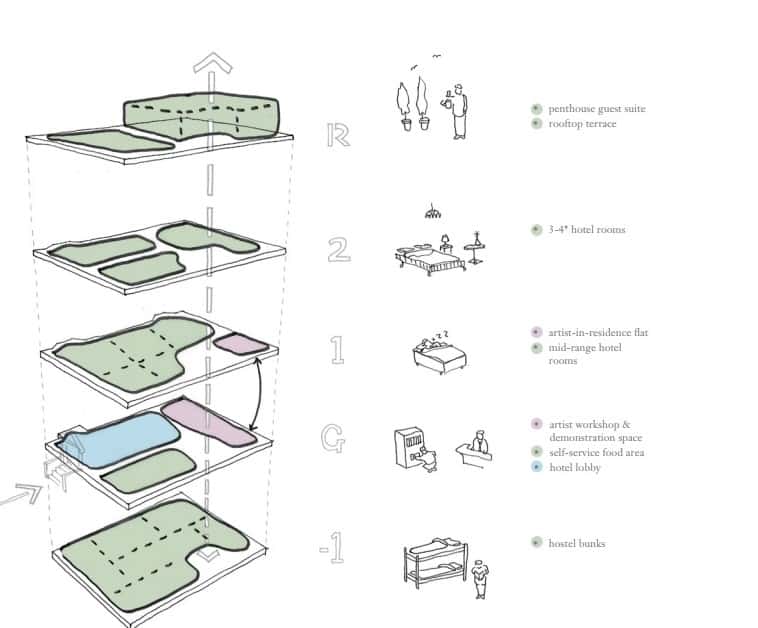 An “all star” boutique hotel, to accommodate visitors to the town and gallery, guest lecturers and backpackers. A demonstration and workshop space is visible from the public lobby for the artist-in-residence, who creates and curates artworks for display throughout the hotel. 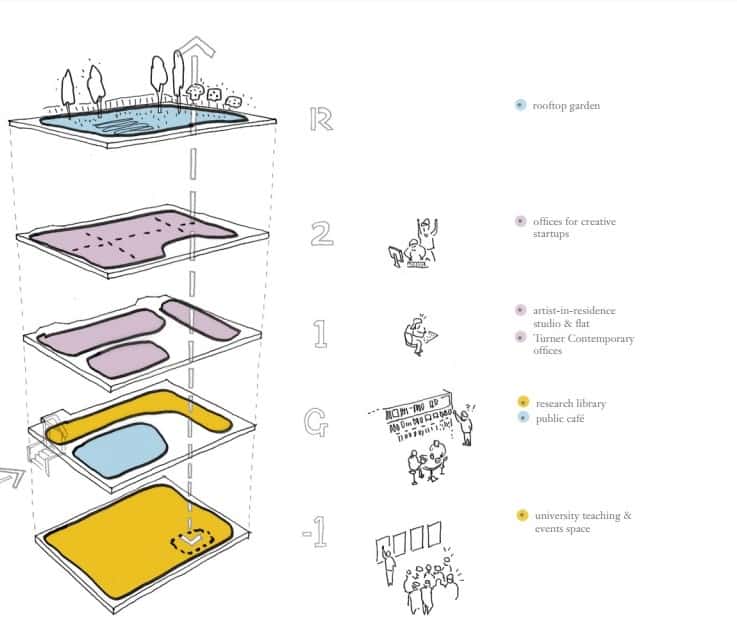 A new centre in Margate for creativity and thinking surrounding the work of the gallery.

Public library and learning spaces at ground floor to complement university-linked teaching spaces in the basement, and artist office spaces above. Roof potential for a new public space; garden or terrace. 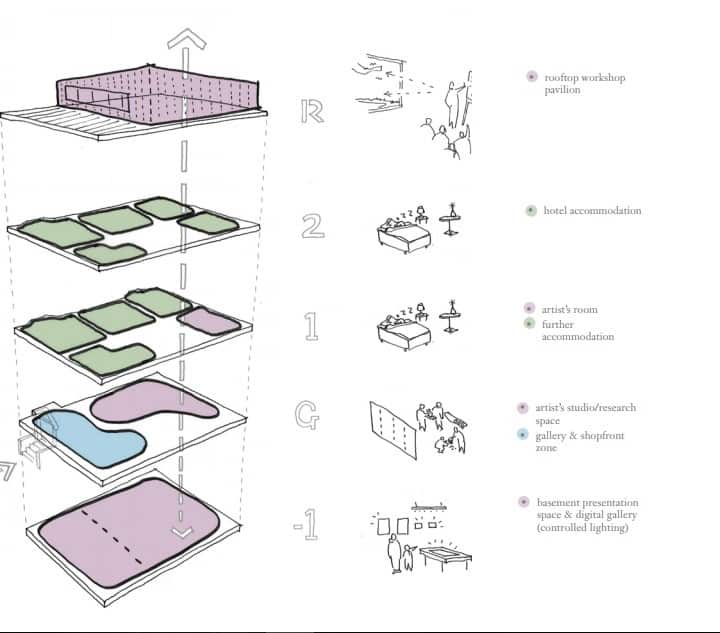 A commercial venture for the gallery combining an exhibition and artists’ research space for the public, with functional hotel accommodation higher up the building. 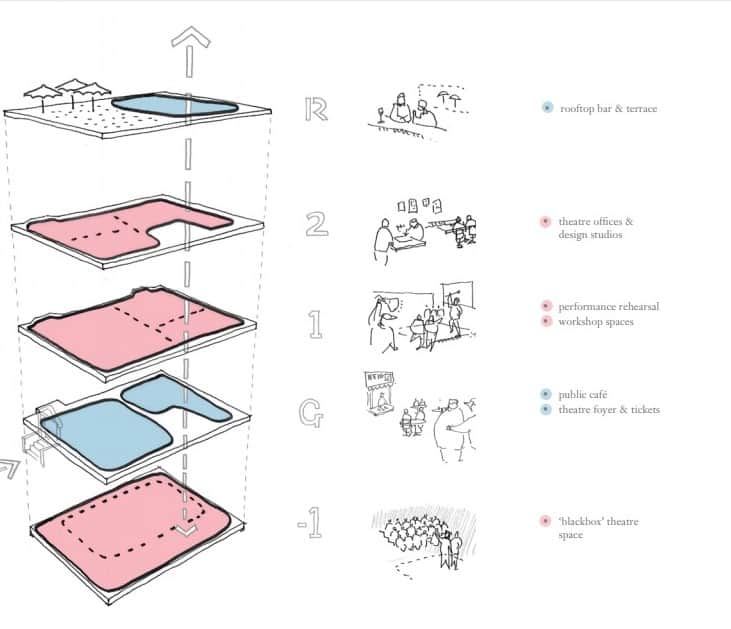 The Fort Road Hotel mooted as a home to local businesses, crafts or performance.

The insertion of new floor plates for dramatic new volumes within the building, such as a double-height lobby or basement theatre.

The Turner Contemporary proposition did not come to fruition when  the council declined to sell the freehold, preferring to offer a long lease to “prevent land banking….plus prevent any residential use.”

The terms meant Turner Contemporary would be unable to invest endowment funds in the scheme, making it no longer viable to move forward.