There were eight changes in Wanderers squad compared to that which had a big win at Sheppey last Saturday week (September 23).

Among them, there was a debut at inside centre for Jay Morbey who has recently moved to the area and a first start on the right wing for teenager Reece Hougham who has impressed in the second XV. Jay Sanford replaced Neil Wakefield at hooker and James Langridge came in at scrum half.

Wanderers kicked off down the slope against a Lewes side which had just fifteen players and were soon further handicapped by an injury to their tight head prop. If this was supposed to restrict the Sussex side’s attacking instincts no-one had told the players. They started at a high pace and were soon putting the home line under pressure before, with ten minutes played, they touched down wide right for an unconverted try.

The first quarter belonged to Lewes but with strong breaks from Danny Clement and Isaac Roe and a powerful carry from Adam Gaddes a Thanet penalty was earned. From the resultant line-out the ball reached Morbey who powered over for his first try as a Wanderer and Nick Herbert’s conversion gave them a 7-5 lead. 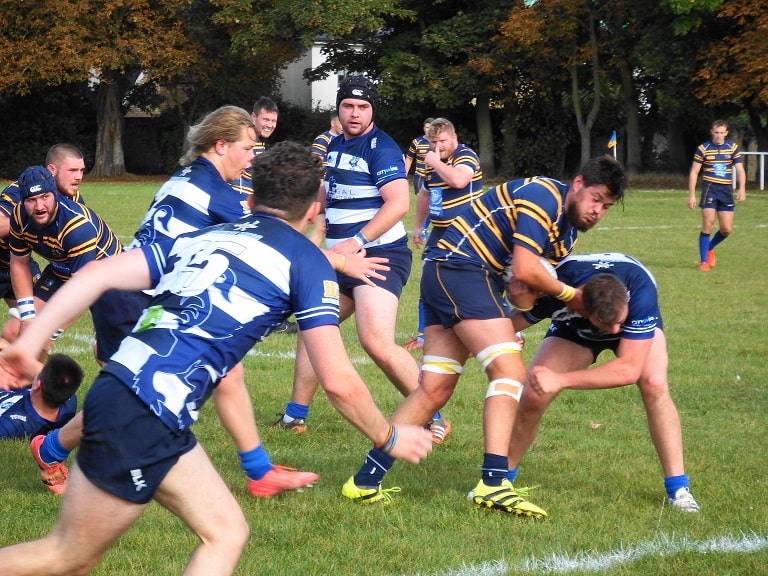 As the initial Lewes opening burst faded Thanet had the opportunity to extend their lead but Nick Herbert’s penalty attempt came back off a post. Four minutes later, after a good break from Hougham and smart handling among Wanderers backs, Herbert finished things off before making no mistake with the conversion. Alfredo Furmanek was back on Thanet’s left wing today and minutes later his trademark counter attack from his own half saw him score a terrific try which Herbert duly converted to give Wanderers a 21-5 lead at half time.

Lewes made a lively start from their kick off for the second half and there were good tackles from Hougham and a potential try saver from Kieran Wright before Herbert cut a good line to hand on to Morbey whose power tested Lewes’ defence.

Peter Macaulay headed off a Lewes attack with a good clearance to near half way but some quick handling from Lewes was rewarded with a second try that was converted for 21-12. Furmanek again broke well for Thanet and Hougham was denied by a rogue bounce. Wright made way for Dave Lemon who was soon pinching a line-out and earning the plaudits of an appreciative balcony for his defence.

As the final quarter neared, a penalty on the visitors’ ten metre line led to more Wanderers slick handling and ended with Herbert touching down for his brace and 26-12. Joe Carlier has started the season in fine form as Thanet’s tighthead and he crowned another good game with a try eight minutes later.

Andy Letts after a typical all action performance at 8 now withdrew following a knock to be replaced by second team coach Andy Ballen who was immediately involved when catching the kick off to mount an attack. Danny Clement rounded off a characteristically aggressive performance with a series of strong tackles to help snuff out a late Lewes revival before a crunching tackle from Peter Macaulay caused a spilled ball that was picked up by Morbey who outpaced defenders to register his double. Herbert’s conversion made it 38-12.

Tom Longdon was a late addition to the sub’s bench and, after entering the fray late on, he joined in an interchange with Furmanek who scored to register Wanderers  third brace of the afternoon. Herbert’s conversion wrapped up a good win by 45-12.

Lewes attacked throughout and Wanderers defence needed to be on top form against a skilful and resilient Lewes side. There was another effective performance from Adam Gaddes whilst the energy and stopping ability of Warren Riddell-Broomfield and fellow back row Captain Brett Scott  were important today.

Head Coach Tom Carlier felt the win was founded on a quality team performance but amongst many good individual performances he singled out newcomer Jay Morbey as his Man of the match for a strong all round debut including two tries and an uncompromising defensive display.

The first XV are away to Bromley side Park House next Saturday. The 2s who lost 24-22 this week at Dover, after conceding a late converted try, will be at St Peters versus Sevenoaks (Kick Off 3PM). Your support is invaluable.