Ramsgate Port could be used as a ‘temporary’ truck and coach park – for two years.

A planning application has been made by Thanet council’s harbour master Rob Brown for the fenced in area, previously used to  park HGV’s which were either waiting to be shipped from or had arrived into Ramsgate by ferry, as a 90-space truck park.

The area is approximately 3.02 acres  and was last in use by TransEuropa Ferries in 2013 for HGV parking before the company went bankrupt.

There is space for some  ninety, 44 tonne HGV trucks. The site was used for vehicle parking from 1998 – 2013. Before that it was car assembly lanes for cross Channel passenger ferries.

Between January 2016 and January 2017 the site was used to store new cars that had arrived by sea as a result of a deal with transport and logistics company GEFCO UK Ltd.

In planning documents submitted for the proposal it states: “The maximum anticipated number of HGV movements to and from the Port as a result of the proposed truck park is 100 vehicles per day.

“This is a small percentage of the HGV movements recorded when the port accommodated a cross Channel service up until 2013 when freight movements in excess of 500 vehicles per day were not uncommon.

“The proposal is considered to be compatible with the character and function of the seafront, Royal Harbour and Ramsgate town. The port is served by a dedicated access road and tunnel with a direct link to the A299, therefore no HGV’s destined for the truck park will have need to travel through the town to reach the site. 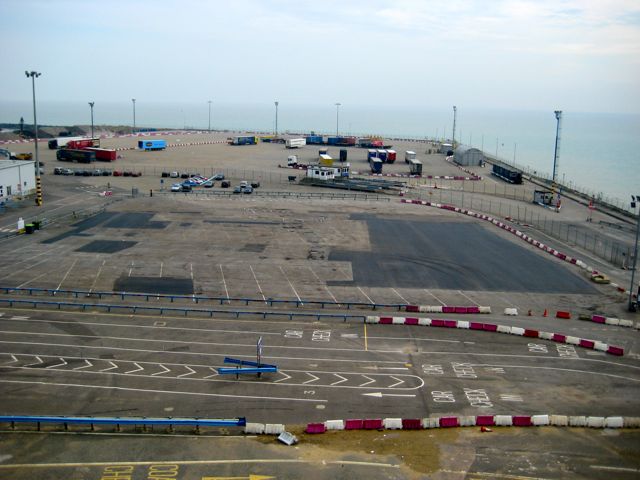 “The proposal will encourage legal overnight off street parking of HGV’s and has potential to help reduce HGV parking on carriageways in the district and county which can cause a hazard to other road users.”

The site will be managed by 24 hour, 365 day a year security, within the terminal building.

The document states that the use of land adjacent to Manston Airport site was disregarded due to the distance that coach drivers would need to travel after dropping passengers off in the town.

It adds: “Presently, there is only limited on street coach parking available in Ramsgate at Royal Esplanade (CT11 0HH) or Victoria Parade (CT11 8DU). The only alternative off street parking for coaches in Thanet is at Vere Road or Joss Bay, Broadstairs or Dreamland, Margate or Minnis Bay, Birchington.”

The documents do not state what, if any, the parking charges for lorries and coaches will be.