Tales from one of the few remaining ‘Tunnel Rats’ who spent part of their childhood sheltering in the old Ramsgate tunnel air raid system during World War Two will be immortalised in a new novel.

Enid Foster sadly passed away at the age of 87 this year but stories from her life will live on in a new novel penned by Broadstairs author, and Enid’s neighbour, Geoff Rouse.

Geoff, who served in the Home Counties regiments and volunteered for the Queen’s Regiment, has published The Kiss Before Morning – created through a combination of his memories, Enid’s stories of wartime Ramsgate, and a good deal of research.

The book features a band of children at the beginning of the Second World War who befriend a young Jewish refugee boy living in the Kitchener camp at Sandwich. The group struggle through the traumas of national crisis and growing up in the streets of Ramsgate. Their adventures lead them to an old decaying fishing smack and they spend the summer bringing it back to life, resulting in their being drawn into the chaos of Dunkirk. 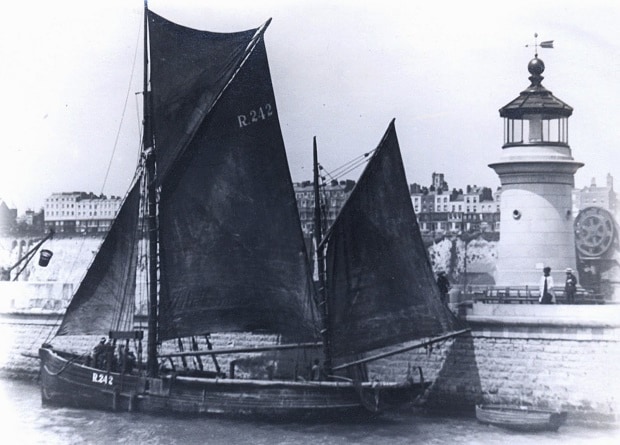 Many of the details are drawn from memories which Enid shared with Geoff before she died.

She was one of hundreds of children who, with their families, sought the safety of the Ramsgate Tunnels during the Second World War.

Last year Geoff and his wife brought Enid back to the tunnels – her first visit in more than 75 years – after hearing her stories of wartime Ramsgate. 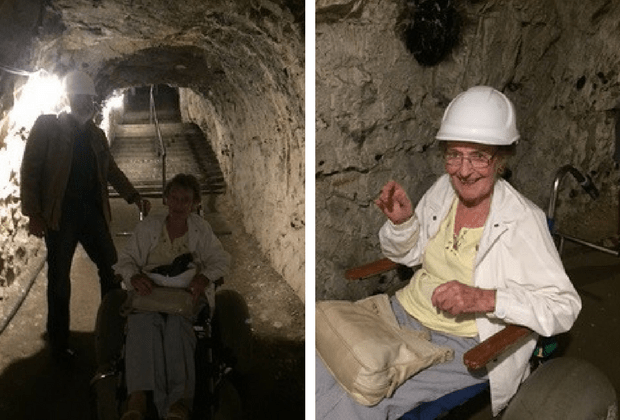 Geoff said: “I chanced to get into conversation with my next door neighbour, an elderly lady born and raised in Ramsgate, who, from her immaculate home in Broadstairs surrounded by memories, recalled to me her childhood during the early years of the war and the days of Dunkirk.

“Enid also told me of her time living as a ‘Tunnel Rat’ in the shelters constructed under Ramsgate. They branched off of the old disused railway tunnel and followed the route of the streets.

“This was because it was cheaper and easier than negotiating permissions from the homeowners above to tunnel under their properties. Enid had huge admiration for the mayor of the time A B Kemp. He was the man who tirelessly hounded the government for the funds to build the shelters and so doing save countless lives.

“Known as the ‘Top Hat Mayor’ he would appear at official functions and in public in full Edwardian frock coat and hat. She also told me of the gangs of children down there and the antics that earned them their nickname, of the Christmas party in the gloomy deep and the barefoot soldiers returning from France.

“As a special treat for her in July 2016 my wife and I took the now very frail Enid back to the tunnels where some dedicated and enthusiastic people had reopened a section to the public. She was delighted to see the shelters once more, travelling in a specially adapted wheelchair all the way through, resplendent in her hard hat. 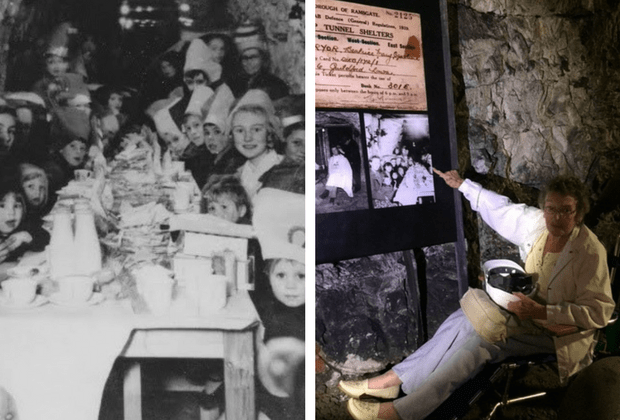 “The picture of her (on right, blonde hair, looking directly at camera) and other children attending the Christmas party in the tunnels in 1940 is now part of the display and Enid was almost speechless with pride when she was pointed out in both the picture and in person to the other visitors on the day. The guide spoke to her at length gathering from her a great deal of useful information.” 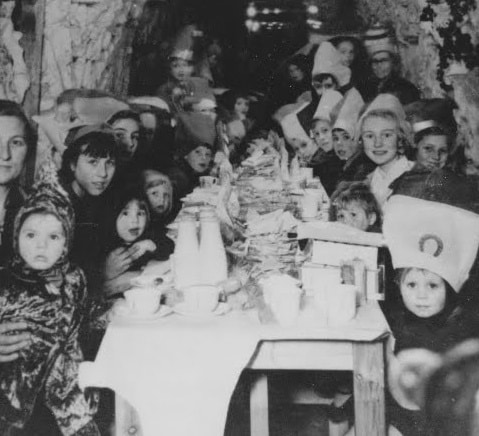 Prompted by Enid’s tales Geoff, who had already penned books set in the Afghan wars, decided to write a new novel which would be a blend of his own experiences mixed with many of the details passed on by his neighbour.

The former Queen’s Regiment soldier said: “She was, I’m proud to say, a dear friend of mine. Now as a writer I respectfully take part of her life and memories to bring to life my story. 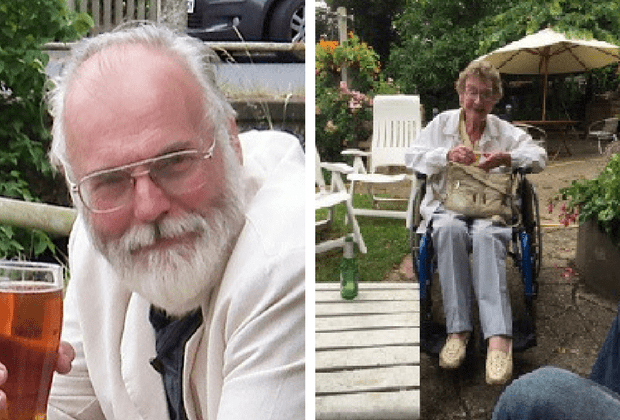 “I  resolved to write a story combining these situations and events and so was born The Kiss Before Morning – a tale of a gang of Ramsgate kids growing up at the start of the war and of an old fishing smack they chose to be the centre of their last innocent summer and of two Jewish children, refugees, who one day cross their path.

“My research took me to Bath where still exists the, until recently, sadly neglected Jewish cemetery and then to Norfolk to look into the area’s history with some of their smacks still sailing.

“I needed characters for the story and where better to find them than in the history of my home town and so it was back to Ramsgate. Names were cross referenced with Enid and the long dead were resurrected. So, Mickey Mockler, Hooky Wood and Mr Darby the high street butcher rose again.

“Others merely names well known historically in the town, Newbury, Champs etc. One or two other characters came along like ‘Alf’ the lad serving on one of the provisioning vessels out of Ramsgate the ‘Treasure’ and the ‘Provider’. He also really existed and was in real life the young  Alf Hardwick a good friend of mine and still a regular visitor to my home. These two boats did not actually take part in the evacuation but out of respect I threw them in.

“The gang in my book struggle through their various traumas and go through what must, I suppose, be called a kind of rite of passage into young adulthood and the terrors of the times. If you venture to risk a couple of quid on the book I hope you enjoy it and understand the emotion involved in its conception and creation. Much of it thanks to Enid Foster to whom it is dedicated.”

The Kiss Before Morning also features the Kitchener Camp in Sandwich which housed Jewish refugees of the conflict. 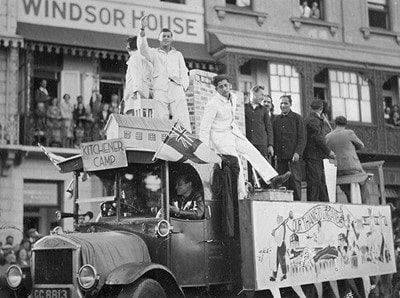 Geoff, who writes under his own name and as Arthur Blaedon-Foote when penning children’s books,  said this part of the novel comes from his own boyhood memories.

He said: “ As a small boy I would occasionally go to the Stonar Lakes at Sandwich where my father worked. Sitting, almost lost, in the capacious rear seat of my uncle Ivor’s old black Humber Hawk we sped through the early morning mist along the Sandwich Road with the car filling rapidly with the fumes of ‘Old Holborn’ and ‘Golden Virginia’ all wrapped in blue Rizlas and hanging precariously from the lip.

“It was the early 1960s and as I wandered the shoreline whistling Freddie and the Dreamers tunes, his ears rang to the din of the heavy machinery. Working mostly alone in the shore plant he operated for Wingham Engineering who were extracting ballast from the lakes. 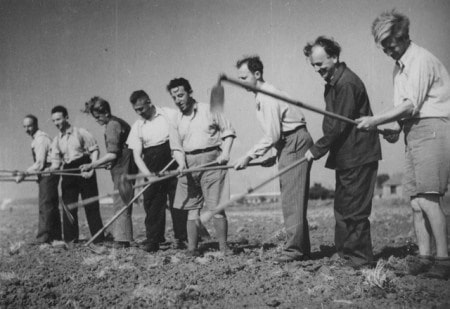 “Sometimes I would fish there. Sometimes I would wander across the narrow divide that separated the lakes from the river and sometimes as a rare treat he would take me out on the lake in one of the two old landing craft that were used as tugs, even allowing me to steer once in a while.

“They were there I suppose because the lakes were used by the Royal Engineers during the war and had been sold off or just abandoned there. Unknown to me there had been a military presence in that area since the First World War and remnants of the camp still remain now overgrown and decaying. 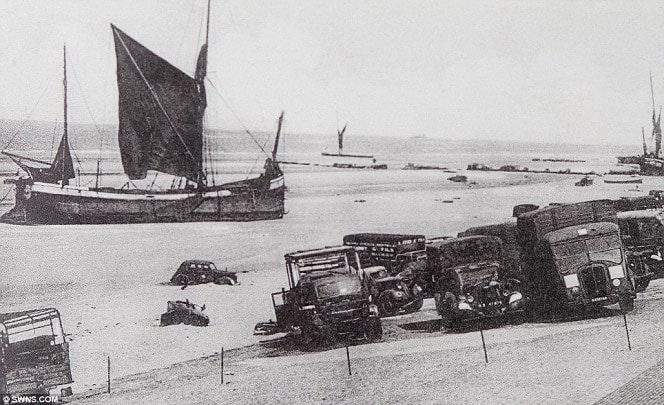 “What also lies nearby equally hidden and forgotten are the almost invisible remnants of a much more important historical site. Not that of the Romans but of the Jews – The Kitchener Camp. Once a First World War army base, in the last war it was handed over to Jewish refugees who, mostly with their own hands, turned it into a small town behind wire. With gardens and accommodation it housed men escaping the Nazis. They even had a lorry in the carnival carrying musicians and banners thanking the people for their help. The vast majority of these men went on to volunteer to serve this country in its struggle against Hitler. 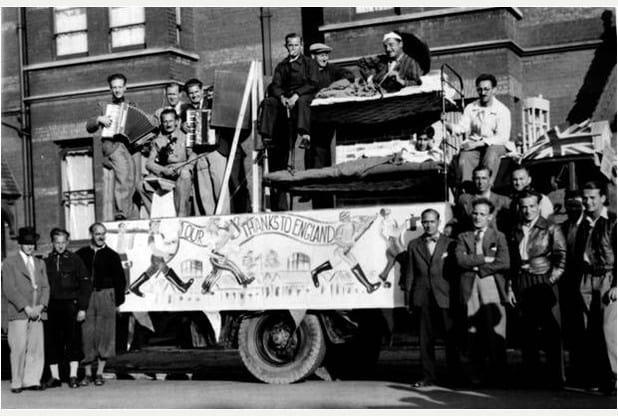 “When not dipping my sandalled feet into the malodorous mud of the Stour during these glorious summers of my youth I could often be found spending my spare time around the harbour at Ramsgate. People there still spoke of Dunkirk, the ill fated ferry ‘Queen of the Channel’ and the Little Ships. Along the quayside stood the Smack Boys Home where I attended the Sea Cadet unit TS Fervent. I often wondered how it got its name and later heard of the fishing smacks that once crowded the harbour there. All alas now long gone.” 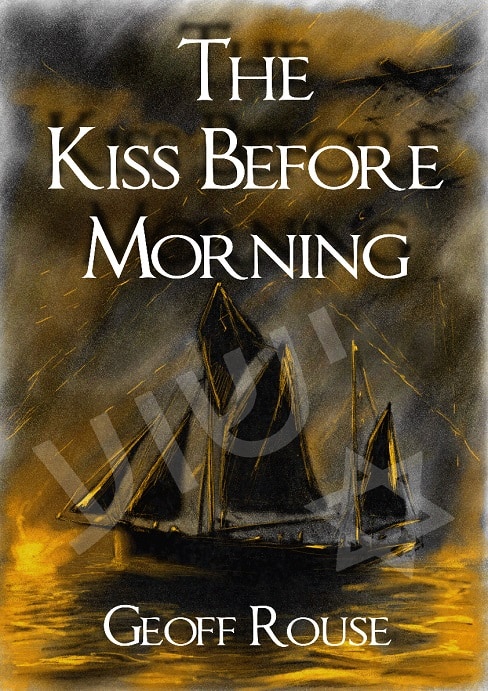 Geoff’s novel, which took two-and-a-half-years to write, is available from Amazon and Kindle and also through CompletelyNovel. It is due to be distributed to shops in Thanet soon.

Geoff, who has studied military history since his youth, has written for many years, both books and for the BBC, The father and grandfather won a comedy drama award some years ago with a play set in the Channel Tunnel. He also appeared in a film by Michel Lang.