Independent councillor Suzanne Brimm  teamed up with Trevor Roper, of the Green Party, and South Thanet MP Craig Mackinlay to launch the campaign yesterday (September 8) during a litter pick of Ramsgate main sands.

Cllr Brimm says the key offenders for waste are single-use water bottles and plastic straws, which can end up in the marine environment after they are chucked away.

The Birchington mum-of-two is aiming to encourage local businesses to offer water refill stations and to roll out paper straws, particularly around Thanet’s Blue Flag beaches, to reduce waste ending up on coastlines and in the sea.

Cllr Brimm said: “I would like to see Thanet emulate the hugely successful Refill campaign that is working in Bristol. They have rolled out a Refill app which shows which local businesses are happy to refill bottles.

“I am now seeking out local businesses who are willing to get involved. Britain’s drinking water is some of the safest in the world, it is simply daft to buy bottled water and then just throw away the bottle.”

Supporting the campaign, Thanet’s Green Party spokesman, Trevor Roper said “This is a positive initiative that will help Thanet. With 500,000,000,000 (half a trillion) plastic bottles used annually around the world, each refill represents a saving of oil, manufacture and transport, all of which create a massive carbon footprint. On top of that there is the environmental saving of rubbish collection and landfill, and cleaner beaches. This is a triple win.” 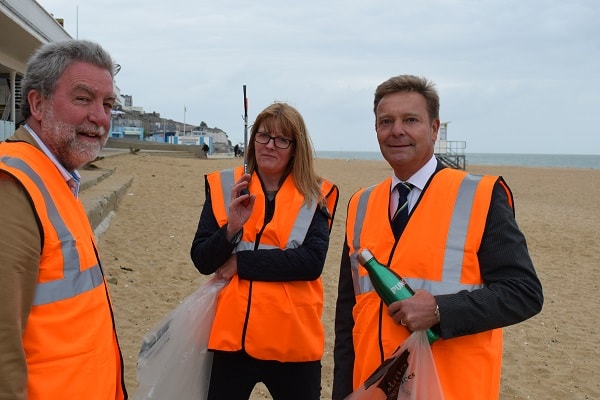 South Thanet’s MP Craig Mackinlay was also at the launch. He said. “I have become increasingly active in the anti-plastics campaign. I am pleased that plastic microbeads, used in many everyday products such as toothpaste and cosmetics are to be banned in the UK.

“It is time that retailers start to consider their use of excessive plastic packaging. I will be doing all that I can to support Cllr Brimm’s excellent campaign including raising the issue in Parliament.”

What is single use plastic?

Single-use plastics, or disposable plastics, are used only once before they are thrown away or recycled. These items are things like plastic bags, straws, coffee stirrers, soda and water bottles and most food packaging.

Globally, we produce roughly 300 million tons of plastic each year and half of it is disposable. Worldwide only 10% of plastic items are recycled. 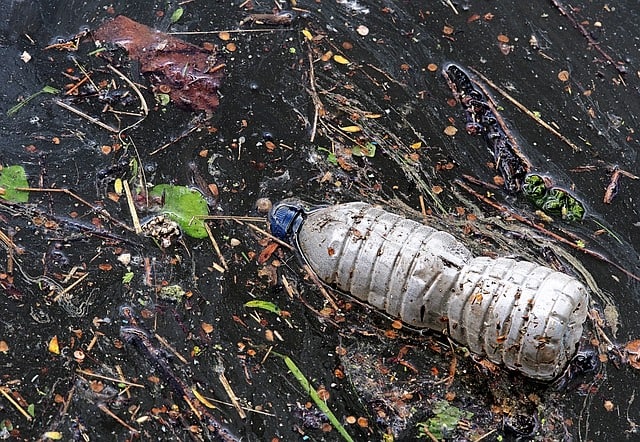 The nature of petroleum based disposable plastic makes it difficult to recycle  and it is not biodegradable.  Although plastic will not biodegrade, (decompose into natural substance like soil), it will break down into tiny particles after many years. In the process of breaking down, it releases toxic chemicals (additives that were used to shape and harden the plastic) which make their way into our food and water supply.

These toxic chemicals can be found in our bloodstream. The latest research has linked them to cancer, infertility, birth defects, impaired immunity and many other ailments. 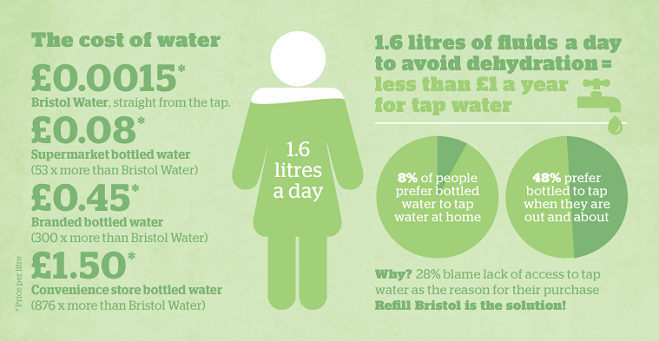 After a successful city-wide launch in 2015 in Bristol, there are now over 200 refill points across its city centre.

Participating cafes, bars, restaurants, banks, galleries, museums and other businesses display a round, blue sticker in their window, inviting thirsty passers-by to come on in and fill up their bottle – for free.

Get tips on reducing your plastic use here