Ramsgate has been represented at a world championship competition – for bog snorkelling.

Snorkellers have to swim two lengths of a 60 yard trench cut through the bog which then fills with water. Traditional swimming strokes are not allowed, it is all down to flipper power.

More than 100 competitors from across the globe took part in this year’s contest, the 32nd year it has taken place. 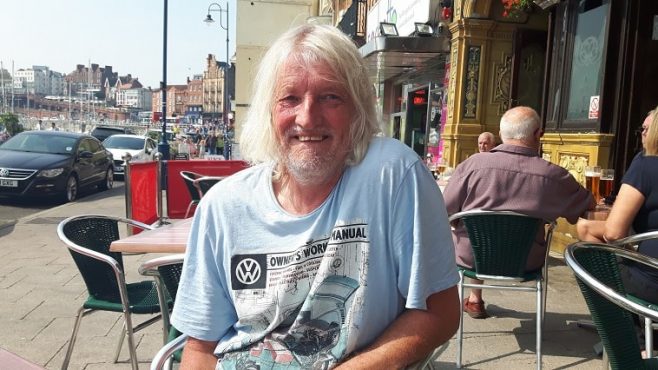 Traffic light engineer Dave, 58, donned snorkel and flippers to plunge into the bog in a bid to beat the over-50s world record.

Unfortunately, a night in the pub – and the resulting hangover – put paid to that ambition but Dave still managed a respectable completion time of 2 minutes and 32 seconds.

The dad-of-one first took up bog snorkelling after a challenge in the Oxford pub in Margate.

He said: “It’s a peculiarly British thing, eccentric. It’s a competitive sport but you’re competing against a ditch not really other people! It’s a bit like trying to climb a mountain or swim the Channel.

“Originally it began when I was down the Oxford pub and the bloke who runs it, Bob Allen, gee-d me up for it by saying I couldn’t do it.

“It didn’t look difficult. When I was younger my dad was in the Army and we lived in Cyprus and I was snorkelling all the time. We called it free diving then. I was very good at it.

“So, I looked at bog snorkelling and thought ‘I can do it, it’s easy.’ It’s not. That first time was extremely difficult.

“My time wasn’t even taken as it was outside the five-minute limit.

“The second time I improved to 2 minutes 30 but this year it didn’t improve because I went to the pub the night before and did it with a hangover!”

The over-50s record stood at 1 minute 47 seconds, so Dave had a fair bit to shave off his time. But, the determined snorkeller, who competed as Sue’s champion, will mount another challenge next year. In the meantime, he will continue his daily training at Walpole Bay with the backing of the tidal pool swimmers.

The rock show presenter for Sittingbourne FM said: “I train there all year around and everyone has been really supportive, they are a great bunch of people.