New cigarette’ voting bins’ are to be launched in Thanet.

Thanet council aims to use the bright yellow bins to encourage people to bin their cigarette butt rather than drop it on the floor.

They are designed to draw attention by providing smokers with two options to answer a topical question using a cigarette butt to cast a vote. When used in other locations across the UK, the bins have helped cut litter by as much as 46% – particularly when the bin’s question is directed at young males. 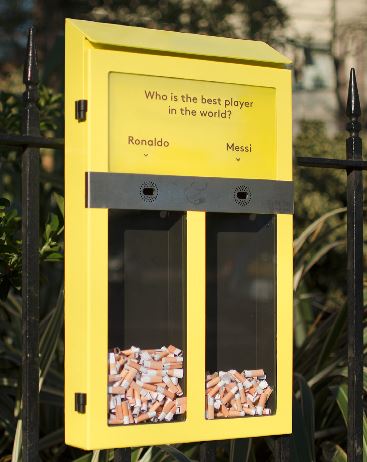 Two of the voting bins will appear in various locations across the district following an official launch on Friday (August 11). The first question on the bin will be: ‘Who will win the premier league this season? Vote either: Chelsea or Manchester City’.

The questions on the bins can be changed regularly, with suggestions for others welcome via: Streetcleansingteam@thanet.gov.uk.

Cllr Suzanne Brimm, Cabinet Member for Operational Services, will be at the launch of the bins in Margate.

How many cigarettes fit in the bin?

How will this help reduce litter?

Research by environmental organisation, Hubbub, found that litter was mainly generated at night by young men and that cigarette butts were the item most littered. The voting bin was their response to these research findings and builds on proven behaviour change techniques.

The bin is a fun game helping to jolt people out of their normal littering routine. It is topical – the questions can be changed as often as we like and can be focused reflecting the interests of the audience we are trying to reach. The requested behaviour change is easy to follow.

Read here: Thanet council to install bins with sensors that alert crews when they are full