My favourite part of our wedding day was the moment I swept down the stairs towards the Bentley, in pearls, frock and crystal studded eight foot veil, to be met by my waiting teenage son. He stared at me thoughtfully.

“You’ve put too much effort in.”

I roared, and relaxed. He wore jeans to play his guitar for me as I glided down the aisle, to stand beside my about-to-be husband – who also wore jeans. We both got the wedding we wanted. And the music hall, vegan food, doughnuts, candy floss and speeches were all triumphs. Portly old aunties, sedentary for years, danced until their hips groaned.

Bride brain! That’s totally a thing. I ordered 78 sandwiches for the big day. Not to cater the wedding, you understand: just for the bridesmaids to nibble while they had their hair and make up done. I had five, not a battalion. One asked if it were a “high” church, and if she should duck before the altar. 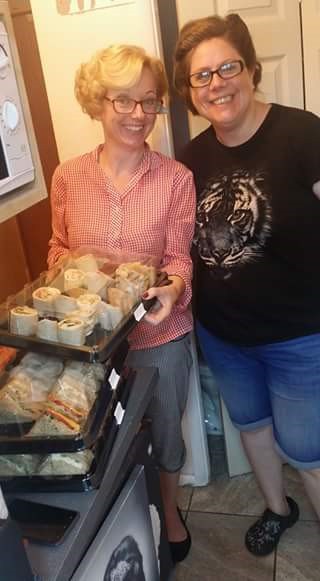 “Oh no!”, I replied “The ceilings are pretty high, I mean Todd can manage fine, so – oh. I see what you mean. That kind of high.”

I remember little of the service, except getting my heel caught in my train a few times, and struggling not to faint as I knelt at the altar. People applauded. There was confetti. It was like taking the lead in a fascinating play, with the vicar as constant, insistent prompt.

I didn’t cry, not until I had to check into the hotel and sign as Melissa Todd. Look, it’s just a really great name, OK?

“Does it make a difference, being married?” asks my imaginary friend. And I answer irritably: of course it does! We weren’t living together before, so now everything – everything – is different. We’ve had to negotiate the proper division of bills and chores, the correct route to strut round a supermarket, the right time to make a bed, go to it, rise from it.

We’re like children playing house. I bring him wine in the bath and cook his favourite meals: he lugs our respective belongings to their new rooms and pays me endless compliments. It’s enormous fun, exciting, exhausting, and a little scary. Will he mind if I take an hour off from unpacking boxes to watch Judge Rinder? (Not a bit). Must we really listen to hours of 16th century folk songs before breakfast? (Apparently, we must).

He’s noisy and messy: I’m tidy and taciturn. But so far it’s bliss, nonetheless, and we’re staunchly determined  to accommodate each other, and be happy, whatever it jolly well takes.

I’ve never understood the notion of living with a man before marriage. As a trial run, my irritating imaginary friend suggests: a chance to learn what you’re getting? But you’re getting a man, and surely, she knows what they’re like? They’re a lot of work. And mess, and noise. Why put up with all that without the associated tax breaks and pension rights, the pretty dress, the eight hour groovefest with your pals?

Our first row – a full on, screaming humdinger – was pretty exciting too. Suddenly, there was nowhere else for us to go. We just had to fight until we’d run out of strength. Before, I’d have told him to go home. But he was home. I am his home. We fought ourselves to sleep, and in the morning we’d entirely forgotten what it was about, although, incidentally, I was completely in the right.