A three-day Royal Harbour History Festival in Ramsgate, including a cricket match on the Goodwin Sands, is expected to attract some 80,000 next year.

The event, from June 15-17, 2018, is designed to highlight Thanet and East Kent’s rich historical tapestry and cultural identity, and places a signiﬁcant emphasis on commemoration, celebration and education.

The festival will promote the wealth of concentrated local history and cultural air, sea and land inheritance. Romans, Saints and Vikings – they all came ashore here. Thanet has also inspired famous authors, architects and artists. It played a strong role in defending our nation and deﬁning our seaside style.

It will also highlight the area as a Destination History County.

The cricket match on the notorious Goodwin Sands is the first to take place there in more than a decade although it had been something of a tradition since 1824.

Alongside programmed events, the event will feature diverse history modules, each with a mixed and unique three-day programme that will excite, engage and inspire all ages and tastes.

There will be a particular focus on education and encouraging children to learn and take pride in their local coastal history. Friday, June 15 will be the Schools’ Festival Day.

The programme will  include speakers, musicians, historical interpreters, from further aﬁeld, particularly those recognised at a national or international level.

It is being supported by the Royal Navy, the Association of Dunkirk Little Ships, Visit Kent and Thanet District Council

The layout of the harbour and town of Ramsgate is an ideal ‘stage’ for the festival. Each module of history will have a dedicated location and many will have a ‘pay-per-visit’ marquee.

Each will have a varied programme including lectures, debates, various displays, living history, interactive experiences and re-enactments, many of which will be freely available to the public and schools.

Devised by Past Pleasures Ltd, these bespoke site-speciﬁc scenarios and dramatic re-enactments produce colourful, lively, immersive and enjoyable living history events. Their award-winning education team includes qualiﬁed teachers, academics in the ﬁeld of Museum Education and specialist TIE actors who dovetail the modules with the National Curriculum. These include “have-a-go” sessions for young visitors to the Roman, Viking, Napoleonic, WW1 and WW2 areas.

A key event of the Royal Harbour History Festival is a special cricket match on the infamous Goodwin Sands to       celebrate our maritime heritage, commemorate  the thousands that have perished on the Sands and to educate the     public on our rich historic environment.

Fourteen players will represent either a Royal Navy team or the Royal Harbour team.

The umpire will be The Admiral of the Fleet, the Lord Boyce, Patron of the Royal Harbour History Festival.

Teams will travel to the Sands by Twin Cats. Prior to the match, cricket tea will be served in the Royal Navy      marquee at the Royal Harbour.

Cricket equipment has been provided by Gray-Nicolls. 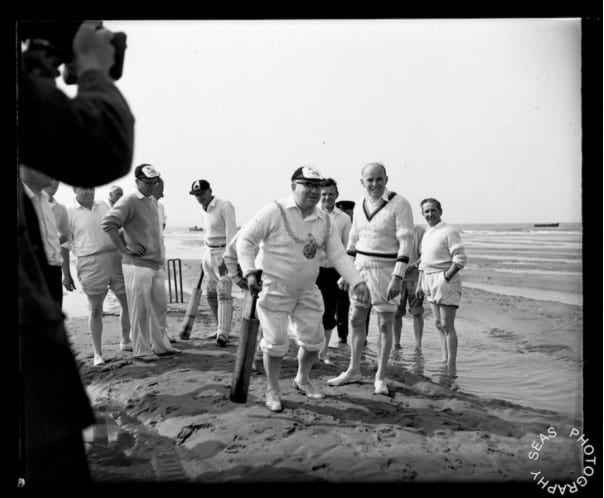 The Goodwin Sands is a 10-mile long sandbank in the English  Channel, lying 4 miles off Ramsgate.

This notorious stretch of sand is known as the ‘widow maker’ because it contain the world’s highest concentration    of  shipwrecks. Submerged at high tides, but with areas exposed and dried sufficiently to walk on at low tides, the bank presents a particular challenge to ships given their location at the narrowest part of one of the busiest shipping   channels in the world – the Straits of Dover.

More than 2,000 ships are believed to have been wrecked upon the Goodwins along with the loss of countless lives.

The greatest single loss of life occurred during the Great Storm of 1703. Included in this toll were the Royal Navy   warships HMS Northumberland, HMS Mary, HMS Stirling Castle and HMS Restoration.

The Royal Harbour at Ramsgate was built as a result of the Great Storm. The Sands are also the resting place of   scores of RAF aircrew that gave their lives defending the nation in the Battle of Britain.

The Goodwin Sands has not only been a magnet to ships as a ‘shippe swallower’, but also to people who have a   desire to visit. 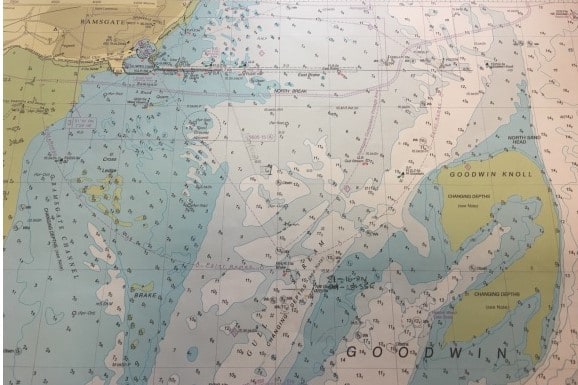 In the Summer of 1824, Captain K.Martin, then the Harbour master at Ramsgate, instituted the proceedings of  the first known cricket match on the Goodwins, at low water. Such was the tenacity of local mariners that a tradition sprang up where many made the journey to play cricket on the sands.

When the Royal Marines School of Music existed at Deal a Summer match took place every year. Matches at low tide were a tradition for some 180 years but not match has taken place in the last decade.

Head of the Royal Marines Major General Robert Magowan, is confirmed as a player in this seven-a-side match. He will be joining other confirmed players, Ryan Sidebottom and Dan Snow.

Peter Snow will talk to camera from the Sands.

A reception to announce the festival takes place this afternoon (July 21) at the Royal Harbour Brasserie on Ramsgate Pier.