Residents of Cliftonville West and members of community group A Better Cliftonville (ABC) will meet with Thanet council leader Chris Wells this week.

The meeting follows a presentation of a petition to full council asking for action on litter issues in the ward.

ABC member Joanne Goodson spoke at the meeting although her request to show councillors photographs of the problem was refused.

In her three minute speech Ms Goodson said the ward needed large, clear signs instructing people to responsibly dispose of litter and dog waste; more bins and a better use of enforcement to send a clear message that littering and dog fouling would not be accepted.

Ms Goodson told councillors: “Despite ABC forming a Waste Forum with Thanet District Council, the streets, clifftop and beaches of Cliftonville remain strewn with litter, blighted by dog fouling and in a general state of neglect-with missing bin lids, inadequate infrastructure and no positive messages being sent to the community around caring for the environment.

“This neglect has a huge negative impact on residents, businesses and  visitors to the area.

“Do you think it is acceptable that the people of Cliftonville should live with streets which fall below DEFRA’s lowest grade of cleanliness? Councils have a duty to ensure that the land under their control is kept clear of litter and refuse.

“A significant cause of this continual stream of litter is the municipal and private bins left without lids-often for months on end, inadequate bin allocation and collections-especially for HMOs and street cleaners never actually cleaning the residential streets.  We are constantly told in ABC meetings that there are not the funds to carry out bin audits, nor the stock to replace lids ,nor the resources to litter pick, weed or clean the streets; but this is not acceptable.

“Litter and dog fouling contaminates surface water, which runs in to the sea -adding to the poor water quality reading at Walpole Bay. 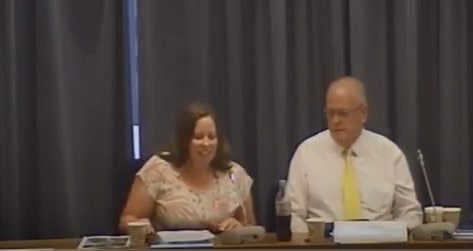 “Local businesses are left with negative feedback due to the unacceptable state of the area- putting off potential visitors to Cliftonville and bringing morale down.

TDC cannot constantly point the finger at residents and blame them, when actually the main factors are missing bin lids-which allow aggressive sea gulls to rip open bags- inadequate cleansing and the lack of infrastructure.”

During a sometimes heated meeting Cabinet member for operational services, Cllr Suzanne Brimm, said more street cleaning services hads been delivered in Cliftonville West in the last 6 months than any other ward in the district.

She told the chamber that TDC is working with residents and ABC on a lottery bid  for new signs, waste campaigns and wildlife houses.

She added that deep cleans have taken place with more scheduled for September.

The response was cut short by council chairman Cllr  Janet Falcon when it ran into comments over the county council 15% allowance rise, with Cllr Falcon  rebuking Cllr Brimm for ‘sniping.’

The petition, with 182 validated signatures, has been passed to Cabinet members.

Following the meeting Ms Goodson said: “We, as a community group, will continue campaigning to get streets, promenades and beaches in Cliftonville cleaned up.”