Two adults and a child were rescued from a fire in Margate in the early hours of this morning (July 2).

Kent Fire and Rescue Service was called to a house fire in Trinity Square, at 4,42am. 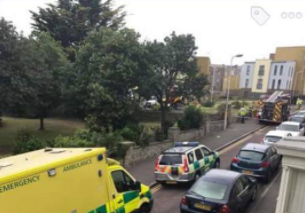 Crews used a seven metre ladder to rescue the adults and  child from the building and wearing breathing apparatus and using hose reel jets tackled the fire.

Care for those rescued was left with the ambulance service.

Kent Police and the ambulance service were also at the scene.

Kent Police has now launched an investigation, saying the cause of the fire is being treated as suspicious.

A spokesman said: “The fire started in an empty flat and is being treated as suspicious. Police have launched an investigation. Anyone with information is asked to contact Kent Police quoting incident number 02-293.”