A new shop in Broadstairs has attracted some huge stars to the town since opening its door just five weeks ago.

House of Martin, at 60 High Street, has taken over the former Wheels and Fins shop and is offering a unique blend of branded clothing, records and books.

And it is attracting celebrity shoppers as well as locals. 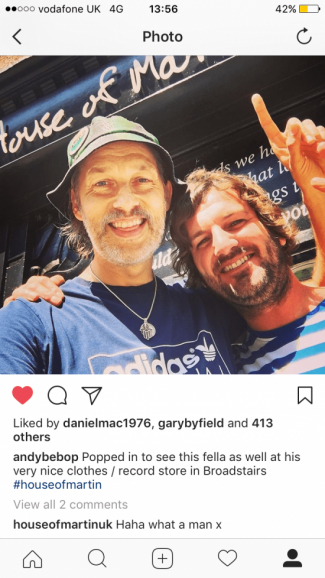 The celebs are being pulled into the town by House of Martin owner Dean Martin.

The dad-of-two moved to the town from Bexley Heath 14 months ago with wife Sarah, who took a social care role with Kent County Council, and little ones Manni, 10, and six-year-old Betsy.

Dean has worked with unsigned bands and clothing brands for years – setting up gigs and arranging for bands to promote clothing brands – but decided now was the time to strike out on his own.

Thanks for the tee looking forward to seeing the place in September pic.twitter.com/0Gjmu3LF9G

The 41-year-old, who is also a former postman, said the aim is to have good clothes, great music and a chance for people to have a cuppa all in one place.

He said: “I’ve worked with unsigned bands for years and that’s how I have connections in the music industry.

“I like that I can share that with people, that they might come into the shop to buy their socks and end up having a chat with someone from Oasis!” 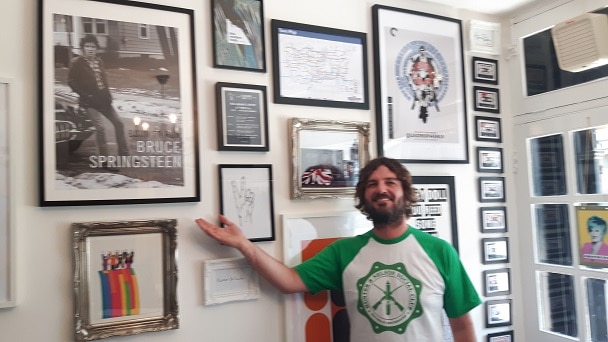 Dean’s industry links are also on show through the band artwork on the walls of House of martin which include postcards created and sent to Dean by former Specials bassist and artist Horace Panter and images sent by Shed 7 and The Rifles.

But Dean says the aim of the store is not to be exclusive, his door is open to everyone.

He said: “I’ve already got regular customers, some come in and ask their kids not to tell their mums that they have been in again! Whether people spend £200 on a jacket or £12 on a pair of socks they all get treated the same and looked after.”

Dean spent four months gutting the store and giving it a complete makeover before setting out his stock which includes Levi, Hunter Nelson, Tootal scarves, Marko John socks and MaStrum. It sits alongside  limited edition and collectors records and books.

The stock will soon feature exclusive Oasis figures of Noel and Liam Gallagher from Beastly Toyz and MonkeesbloodCreative. House of Martin will be the only UK stockist for the figures – which will be positioned on separate shelves.

Dean said: “There’ll be no fighting on my watch!”

And there are more plans for a regular social club night and DJ events – with Andy Bell already down to host the first ‘House of Martin Social Club’ expected this Autumn and The Rifles planned for another set. The sessions will also feature up-and-coming musicians.

Dean said: “This area seems to be really into it music and clothes. I have a mix in the shop from kids through to a man in his 80s who bought one of the Tootal scarves.

“I love it here. It’s hard work and I couldn’t have done any of it without Sarah giving me the confidence to try but I have had a really great response.

“I set it up because there didn’t seem to be anywhere to get good clothes but also be able to have a cup of tea and listen to some music, it’ a bit of a social club for the fellas.”

Dean, who is also one of the only stockists of NME magazine outside of HMV, is also planning acoustic nights at the store and is due to launch a shopping website soon.

Find House of Martin at 60 High Street, Broadstairs or on twitter as @HouseOfMartinUK

“To be kept up to date with all the goings on, including special offers, brands and the music nights join the mailing list at www.houseofmartin.co.uk