Thanks have been issued to Labour Party voters at last week’s General Election.

South Thanet candidate Raushan Ara, who polled 18,875 votes coming second behind elected Tory Craig Mackinlay, said: “I would like to take this opportunity to thank all of the people in South Thanet who gave me their support and votes during the General Election campaign.

“I am very grateful to everyone who helped me, encouraged me to fight this election, or just put a cross next to my name. The reasons that I wanted to become your MP were because I am very passionate about the people of South Thanet, and about improving everyone’ lives.

“As the mother of a special needs son, I am aware of the difficulties faced by young and old for long-term care, education, the loss of the Surestart centres and health matters.

“I would also like to confer with KCC in order to keep some of the secondary school sports areas open during the school holidays, in order for them to be used for sporting activities.  I want to see the refurbishment of the numerous empty properties in the constituency, and their being put to good use, in order to assist the chronic housing shortage, an end to cuts in benefits and an end to austerity. We live in a coastal area, and I want to ensure that our beaches and seawater retain and regain their blue flag status. I want to bring in incentives to encourage investment, in order to create job opportunities and fair wages for all.” 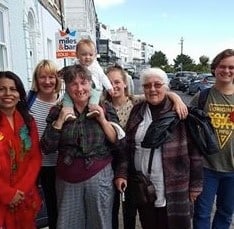 Chair of the Broadstairs Labour Party Dick Symonds added: “I want to extend my thanks to all those who voted for our excellent candidate, Raushan Ara (Thanet South) in the General Election.

“Many will have thought that calling a General Election was entirely unnecessary and an imposition, but it did at least allow the Labour Party to produce the most comprehensive, understandable and fully costed Manifesto for very many years, and in doing so , to underline that the issue is not just Brexit, important that it is, but the wholesale re-structuring of our economy in the interests of all of us and not just the super-rich, the financiers and big business.

“I suspect the exercise will need to be repeated before the year is out for one reason or another and hope that many more of you will flock to support a stable Labour government that will end austerity, overwork and under-pay, so prevalent on our Island. We in the local Labour Party will try to broadcast Labour’s policy and welcome help.”