The people have spoken – at Dane Court Grammar School, at least.

Students stood as candidates for election in each of the school’s six houses. A week of hustings at lunchtime was followed by the vote, which gave a resounding victory for Labour.

Four houses returned a Labour candidate, and there were two Greens. Labour claimed 29% of the vote, Greens 27%, Conservatives and Liberal Democrats both 17%, UKIP trailed, with 10%.

Head teacher Andrew Fowler said: “After the hustings at Dane Court ten days ago, which saw significant support for the Green Party, this school election showed us that the main parties still have much to play for.

“I was delighted with the way our students got involved in the process and I hope they now feel they understand much more about local and national politics.” 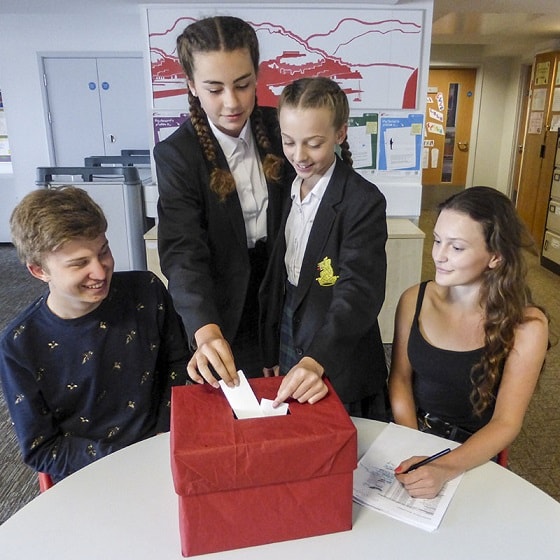 The political process at the school was coordinated by Tatton Spiller, of Simple Politics, who inspired the students and helped them not only to understand the parties’ policies but also get into the spirit of campaigning.

Ben Macdonald, who won the Helsinki House seat for Labour, said: “I really enjoyed the election – it helped me develop my confidence in public speaking. It also taught me a lot about democracy and the country we live in.”

Jaan Richards, 11, who polled more votes than any other candidate, representing Labour for Sorrento House, said: “It was amazing being part of the Labour Party and the whole election. I’d love to do it again, and I’d like to get involved in politics when I’m older.”

His Head of House, Rachel Rolls, said: “We’re extremely proud of Jaan. He really researched his policies and engaged very well in the hustings.”

Thomas Williams, Barcelona House, Green Party, said, “It was great to get involved with the political process. I enjoyed meeting the actual candidates at the Dane Court hustings – it was good to see them as real people.”

Sixth formers Bella Sabin-Dawson and Imogen Cole reported: “It’s been a pleasure to represent the Green party and it has given us a much better understanding of politics.”

Youngest to stand was 11 year-old Jacob Hyland, who found it “a good experience but nerve-wracking, especially when people asked me questions I wasn’t expecting and I had to answer them.” He was returned for Delphi House, representing Labour.