Mr Farage, who lost the battle for the seat in 2015 to Tory Craig Mackinlay by just under 3,000 votes, said the visit had been arranged a week or so ago – before news broke of election expenditure fraud charges being brought against Mr Mackinlay.

Speaking while he was meeting residents in Sandwich Mr Farage said he now expected the Conservative vote to “collapse.” 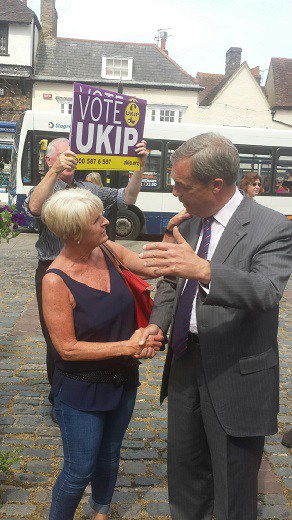 He added: “People are shocked that the sitting MP has been charged.”

He urged Conservative voters to transfer their ballot to UKIP, saying: “I think this is a two-horse race now between Labour and UKIP. UKIP needs to appeal to Conservative voters who want Brexit and an MP who will sit in Parliament for the full five years. UKIP can do that.”

Despite predictions of a two-horse race, the UKIP vote itself collapsed at the county council elections last month where memebrs lost all seven seats. Conservatives gained five seats and Labour gained one, taking their total to two.

Mr Farage said he was concentrating on his position in the European Parliament and the Brexit negotiations.

He will be in Ramsgate later today and will attend a meeting of the party at 5pm. The meeting has now been moved from The Oddfellows in the High Street to The Townley, across the road.