A second giant agave plant has begun to bloom at the Italianate Glasshouse in Ramsgate.

American agave plants bloom just once in their 100-year lifespan, making the sight a rare and beautiful one.

Glasshouse custodians Phil and Janice Dadds were delighted in 2015 when one of their agaves grew so tall panels had to be removed from the glasshouse so it could reach skywards for its spectacular flowering. 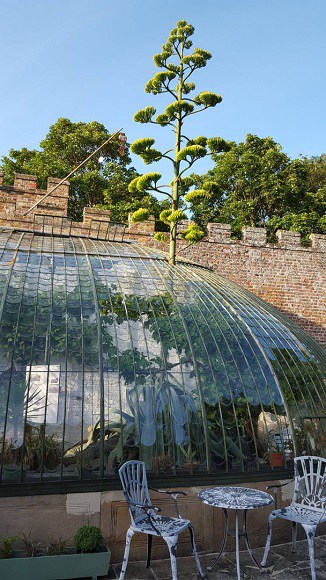 It reached an amazing 27ft and was in flower throughout the Summer.

But the event had some costs – it took the couple more than a year to remove the plant and then they had to put back the panels in the glasshouse and have all the scaffolding removed. It was such a huge job that it even appeared on ITV’s Garden Nightmares programme last September.

Now it looks as though they will have to undertake all the work again because a second agave plant has started its upward climb to flower.

The agaves were installed at the same time so the couple say they had an inkling a second one may flower.

Janice said: “When the first agave went up it started secreting and last year this second plant started doing it.

“It means we have to do everything all over again and we have to watch it because of things like high winds, so Phil has to strap it up. It’s a bit like Jack and the Beanstalk!”

Despite the work involved the pair are delighted to have a second plant in bloom and it is sure to draw in the visitors to the glasshouse in King George VI Park.

Some 4,000 visitors stop by the glasshouse and tearoom each year but the agave could triple that number.

Not only will they be able to see the second agave bloom but the spike from the first plant is being made into a totem pole.

The Italianate Greenhouse has been at the park since 1832 and was originally part of the estate owned by Sir Moses Montefiore. It was taken over by Ramsgate Borough Council in the 1950s but fell into a state of disrepair until its restoration in 2005.

By Kathy Bailes and Chris Smee