Me and the Dalek had a nice outing to Pierremont Hall polling station last Thursday week.

A powered wheelchair, which my friend Jackie has to use, is limited in the same way as the Daleks used to be when it comes to stairs. They’re impossible!

So, for the umpteenth time in two years, we turn up at the bottom of the steps of the polling station and Jackie yells for somebody in charge to notice her. 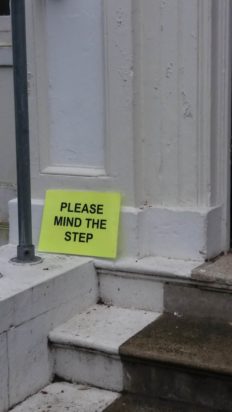 While we’re waiting I spot several stick users having problems because the steps don’t have a hand rail. Someone has to be helped down by the friend she took with her and another has to rely on Jackie’s husband to rush in with a hand.

Yelling finally pays off and out comes the poor electoral officer who has to find the ramp and then work out how to use it.

“I’ve been trained by the caretaker how to use this so I’m sure it’s OK,” he asserts in a very top official manner.

“But the bit on the top shouldn’t have an upturned section, that goes on the other end,” I say.

I’m from the industrial Midlands and my dad was an aircraft engineer so I know everything about how things fit together. Well I don’t really – but this was obvious even to the nonogenerian voter struggling up the steps while Mr Official played around with the ramp. “It’s the wrong way round”, she said.

So, eventually there’s a climb down on the right way round argument and Jackie gets in. And votes.

Getting out was much more hazardous than last time because last time five officials, plus us, were around to hold the ramp and steady the wheelchair. This time there were only three of us – me with a stick, Jackie’s husband and a friend with a bad back.

The bad back stood on the end of the ramp, Jackie’s husband held the chair and I took photos. We all held our breath.

Officials have once again been informed and no response so far.

Jackie doesn’t want a postal vote by the way, if that’s what you’re thinking. Mr Official suggested that for next time. “I want to be able to do what everyone else can do” Jackie says.

So, what will happen on June 8 for the General Election?

Ground Hog day and a Dalek who’s found her pointy thing that destroys your enemies and can actually yell EXTERMINATE!? Watch out Mr Official!